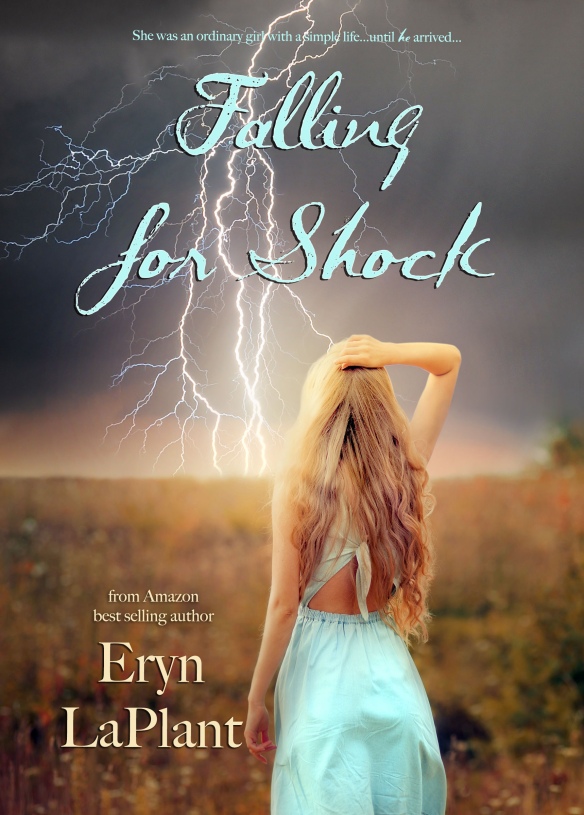 Oliver Hannel, England’s sexiest new star, has finally moved from the television screen to the silver screen, playing comic book hero The Shock in Hollywood’s upcoming blockbuster. While filming one summer night in the midwestern town of Greenfield, Indiana, Oliver finds himself witnessing a crime in progress. Will he embrace his inner superhero and save the day? Or will he remember he isn’t invincible and call for help?

Layla Brooks is a small town girl with a big spirited heart, especially when it comes to her twin sister, Lucy. She will rest at nothing to protect her from a casino mogul’s henchman bent on collecting a debt… even if that includes taking her sister’s punishment. But a strange suited man from out of the shadows isn’t about to let that happen.

Oliver and Layla’s opposite worlds collide with a Bam! But are either of them ready for the lies, truth and lust that comes along with a relationship born of shock? Or will their love come and go as fast as a bolt of lightning?

Buy The Book on Amazon

Layla Brooks is an artist working as a waitress to make ends meet and to save money to pay off the loan sharks that are after her sister for a debt that her deceased brother in law racked up. Lucy is Layla’s twin sister. Layla will do whatever it takes to keep Lucy safe. Even if that means paying it herself. One night one of the goons catches up with her. Out of now where Shock the superhero comes to Layla’s rescue.
Oliver Hannel is an actor. Right now he’s playing the role of a superhero they call Shock. Not only does he rescue her from the goon who’s after her to collect the money owed from her deceased brother in law, he also finds a way to help her sell her art to come up with the money.
”  Drunk on her pheromones, Oliver couldn’t let Layla go quite yet and caressed her cheek with his knuckles. “I was hoping to feel your lips on mine.”
The Sparks fly between Layla and Ollie from the minute they meet. Layla found herself her own superhero.  They butt heads a few times but it’s obvious they have feelings for each other and belong together.
” Layla recalled the way Oliver had said he was, ‘someone who knew better than to hit a lady,’ in the alley. She’d laughed at his gallant comment then, but she now suspected he truly meant it. His character on the television in front of her was kissing the princess on the show. His lips slid and captured the actress’, melding them together as believable as a true couple in love. Layla leaned her head on top of Lucy’s. “Maybe he is out there somewhere.”
I would recommend this book to anyone. Especially if you’re looking for your own superhero!

Eryn LaPlant grew up wishing she could have lived in the books she read, living through characters and their romantic adventures. Now she writes romances of her own to share with readers like you. When not writing, she spends her time with her loving husband, their handsome son and fluffy new Pomeranian puppy in the Land of Lincoln.