Phoenix ‘Nix’ Knight thought pulling his club out of the illegal shit his Pops got them into was difficult.Until he meets Kadence.

Kadence Turner has no business lusting over a student’s father, especially the president of the Knights Rebels MC. Nix is crass, obnoxious and dangerously sexy and for some reason, Kadence can’t seem to hate him for it. The bossy biker breaks down her defenses, but unlike the old Kadence, the woman she is today won’t give in without a fight.

The tension is undeniable, the attraction fierce. A man that wants what he wants and a woman that will fight him every step of the way.

This is the first book in the Knights Rebel MC Series and I seriously flippin FLOVED this book!!  I love MC novels, but it takes a good one to keep me interested and I seriously read this in one sitting.   One word FANFREAKINGTASTIC!

We first meet Kadence (btw I fell in love with that name).   She has had one whirlwind of a past.   Was previously married to what turned out to be scum of the earth named Zane.  He hurts her, destroys her trust in men and her trust in everything.  But she is a survivor and is so much stronger because of what she went through.  She has her heart under lock and key until these heavy boots, leather cut and all kinds of sexiness strut into her classroom and her walls start to crack, or should I say her “V” starts talking!

Nix Knight, HOLY HOTNESS PHOENIX KNIGHT!  HOT HOT HOT.  I fell in love with this man as soon as he opened his mouth. I need a Nix is my life like pronto.  He is strong, dominant, possessive, one hot helluva Alpha Male and happens to be the president of The Knights Rebel MC.  Brown hair, green eyes to die for and tattoos everywhere, when he walks into a room your gonna know it.  He doesn’t chase after women, like EVER.  However when he stumbles in to his sons classroom and meets his teacher Kadence with her sassy mouth, sexy little hot self, smart remarks and I take no crap attitude has sucked him in.  He wants her, he wants her bad but he is going to have to put in some work to get her!

She Promises him ONE Date..

“What am I saying?  Am I really considering having sex with this man?  This crass, dirty sexy man who pushes my buttons, who irritates me while at the same time manages to turn me on?  Of course I am.  Why else would I get on his bike”

And the rest is sweet history..

I don’t want to spoil this book for you.  SO much happened.   The dual points of view in this book kept you interested, dying to see what happens next.  I laughed a lot, I cried a lot.  My heart felt like it was being gripped and torn every which way.  There are three sides to Nix Knight.   The Biker, The Father and The HOT AS SIN LOVER!!! He is the perfect blend of yumminess.  The love he has for his entire
family” melts my heart.

“As much as you hate your scars, I love them, ‘cause they make you, you.  The person who stood in front of me, and for the time, ever, let me in. Me.  If anyone is unworthy of that, it’s me baby”

The scenarios that unfold in this book, the story that River wrote was seriously beautiful.  You’ve got Kadence, Nix, Little Z, then Zane reappears, Nix ex who is complete Trash makes trouble.  Then you meet the rest of the boys at the club.  There are A LOT of stories to be told here one I am DYING for is Sy’s story.  God that man has a story to tell and Im itchin to get my hands on it.  Like any club, they stick together and when things get hairy they are all there for their Prez and believe me things get bad!

I give this book 5 BLAZIN, Sexy Biker stars.  It takes a lot to keep me interested in MC books considering some Ive read and thought they would never be topped, but River Savage has done it. The writing flowed, the series flowed, and my heart was pumping full speed through this entire book.   This book is utterly amazing and I implore each and every one of you to pick it up!!

Resting the cold beer between my legs to  soothe the ache, the boys give me shit for striking out. I feel the same way:  the woman is a tough nut to crack.
“You ready for round two, Prez?” Beau smirks behind his beer. Turning my head, I watch as Kadence storms over. I groan as my broken dick comes to life, apparently not caught up with the news that she doesn’t like him. She stands at the end of the table, arms crossed over her chest, unaware that her position puts her sexy tits up on display. Fuck, this woman is a tease.
“Hey, sweetheart,” I say before taking a sip of my beer.
“Don’t sweetheart me. What did you say to my date?” she snaps, anger clear on her face, and I’ve never seen a more beautiful look on her. Her eyes blaze with fire and the need to push her more fills me. I can’t wait to have her under me.
“Oh, the stiff?” I ask nonchalantly. “Just told him to run along; he didn’t have what it takes to play with the big boys,” I say as some of the brothers laugh into their drinks.
I’ve never pushed a woman this far before; chasing her and teasing her feels so damn good. Something about her pushes my buttons and leaves me wanting more. Most women fall at my feet begging to get in, but Kadence? No, this woman makes me want to do the begging. I’ve never wanted to fuck a woman so hard while spanking her ass at the same time. The way she reacts to me makes my dick hard and God help me, getting her riled up is a sight to see. I can see it in her eyes; she’s fighting it. She wants me and I intend to give the lady what she wants.
“What do you want, Phoenix?” she demands, uncrossing her arms and assuming a relaxed position, but I’m not stupid. The woman is crazy mad and I’ve got a throbbing dick to prove it. “What do I want?” I repeat her question, pausing to take another pull on my beer. “Well, after your little stunt in the bathroom, I wanna pull you down on this table and spank your ass,” I tell her calmly. Even though my balls are aching, my cock is pulsing.
“You disgust me,” she hisses and turns to  walk away. I grab onto her hand, turning her my way. She tries to pull out of my grasp, but my hold on her is strong.
“You don’t mean that. I’ve seen the way your eyes flash. You would love for me to spank that sexy ass right here for everyone to see. Wouldn’t you?” Embarrassment floods her cheeks, and for a beat, I think I might have pushed her too far.

River Savage is the author of the soon to be released,Knights Rebels MC Series. The first book Incandescent, will be released August  11, 2014.

With a soft spot for an alpha male and a snarky sassy woman, Kadence and Nix were born.
River would love to hear from you. You can contact her via email at riversavageauthor@gmail.com or follow her via the links below. 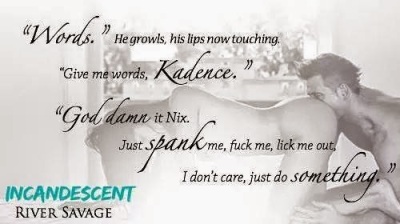