In this sexy new CALL series spin-off series by New York Times bestseller Emma Hart, enter the intense world of a no strings relationship and experience addiction like you never expected…

The moment I walked in to find Mr. Tall, Dark, Handsome, and Oh So British–my mind-blowing one night stand–as my photographer for the shoot that could change it all, I knew life was throwing me a curveball.

The moment he, Tyler Stone, walked into my best friend’s apartment, I knew that curveball was heading straight for my gut.

The hit comes in the form of a no-strings proposition… One that gives him utter control over my body.

If I surrender, that curveball is steadily en-route for a collision course with my heart.

*Wild Temptation is book one of the Wild series and a full-length novel at approx. 92,000 words.* 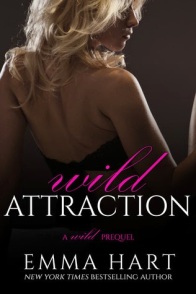 Tyler is addicted to sex.  Tyler sexy as sin STONE!  He Brittish, a photographer, gorgeous and has such a smart sexy mouth.  He gets what he wants, when he wants, however he doesn’t seem to be on the same high horse as his cousin.

Liv is addicted to love.   She wants love, addicted to the idea of love, she loves, LOVE!   But hates strings…. Stringy things are messy and she doesn’t have time for that or any of that relationship crap.   She tried that once and it didn’t work out, why bother trying again.

“Lost: one libido.  If found, please return it to my lonely, attention-deprived vagina”

Both of them never sleep with the same person twice…    The had the hottest sex ever and never knew eachothers names, that was the end of it until  Liv gets a call for a job at a photo shoot.  Tyler so happens to be a Photographer and well you can guess what happens.   AGAIN.   Then you think its stringy at that point?  Liv is Dayton’s Maid of Honor….Guess who just happens to be the Best Man and Aarons Cousin?  Yep.  Our guy Mr. Tall, Dark and Handsome.   Oh Liv hell girl you’re in trouble now!

We have Tyler addicted to sex, Liv addicted to Love.  I mean doesn’t that sound like the perfect combination??   You would think they would mesh like two peas in a pod.  Right?

They come to an agreement and  the sex is off the charts HAWT!  No Strings, No Attachment.  But something changes.   Liv can’t comprehend the feelings she has while it seems like Tyler isn’t afraid to commit.  He is one driven man, when he wants something he WANTS it.  But, will Liv let him in, will she let what seems to be meant to happen actually happen

I seriously loved Tyler and Livs banter.   They are both so hard headed and I laughed while OMG’g several times while reading.    The sexual tension in this book is crazy hot.   I am in love with their story and seriously can’t wait for the second book to see where there relationship, or should we call is sextionship goes.   Whatever is is, I need MORE of it!!   5 Hot Stars!!! 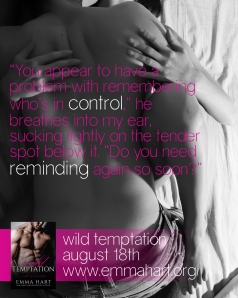 “I refuse to be one of your bitches.”

“You won’t be. You’ll be my only bitch.” He winks, coming up to me. He wrenches the door from my grip and slams it shut. “No strings,” he repeats, turning to me. “An agreement, right now. I want you and I don’t care how I get you. I just have to have you.”

“Sex can get stringy.”

“Only if there’s bondage involved.”

“Do you want there to be?” He raises his eyebrows.

I fold my arms across my chest. “I’m not telling you all my secrets. You’ll have to work them out for yourself.”

He steps into me, pulling my arms from my body. “Is that a yes?”

“That’s an I’m considering it.”

“No strings. No obligations. You won’t have to hang off my arm and look at me with doting eyes. We don’t even tell anyone if that’s what you want. This can be our secret.” He runs his hands

down my sides to my hips and pulls me against him. His mouth finds my jaw and travels along it, his

next words mumbled against my skin. “You want this, Liv. You want this as much as I do. I can see it in your eyes.”

I do. There’s no denying that I want him. My body reacts to him instantaneously. To his looks, his words, his touches. It’s like he knows exactly how to play me to get me where he wants me.

“There’s a but,” I say softly, resting my hands against his chest. “There’s always, always a but.”

“There’s a very nice butt,” he mutters, his hands curving around mine.

He smirks. “Okay, there’s a but. There will be no strings, but you have to do as I say. Always.”

The smirk drops from his face, and I swallow at the intensity his eyes bore into mine with. “In bed?”

“Then you can say no. When it comes to sex, I respect the word no.” He pushes some hair from my face. “I just ask that you try.”

“You want to control me?”

By day, New York Times and USA Today bestselling New Adult author Emma Hart dons a cape and calls herself Super Mum to a terrible two year old and growing bump, due September 2013. By night, she drops the cape, pours a glass of juice and writes books.

She likes to write about magic, kisses and whatever else she can fit into the story. Sarcastic, witty characters are a must. As are hot guys. Emma is currently working too many books to even count – including Playing for Keeps, the companion book to the New York Times and USA Today bestselling novel, The Love Game. She likes to be BUSY – unless busy involves doing the dishes, but that seems to when all the ideas come to life.