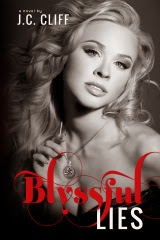 Learning how to survive in her new world, Julianna has no choice but to play “The game of Life.” Except it’s Nick’s game, and his rules apply. Captivity, drugs, and submission are the cards that are dealt, and it’s a losing game. Biding her time as she waits for herrescuers, it’s far from smooth sailing, because all too quickly the rules abruptly change as Nick takes matters into his own hands… As the drama unfolds, and hesitating to interfere, Travis has everything to lose should he decide to step in, including his life. It’s opposition at its finest – freedom versus control as Nick and Julianna face the ultimate battle of wills. While Travis has the uncanny ability to manipulate her with a single touch, Nick struggles to conquer her body, mind, and soul. It’s every man for themselves as each have their own secret agenda, including Julianna, whose plan is simple: survive

Buy Book 1 Blyss for just .99 until the end of December! 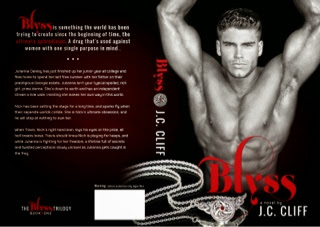 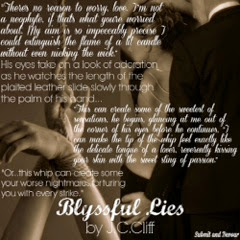 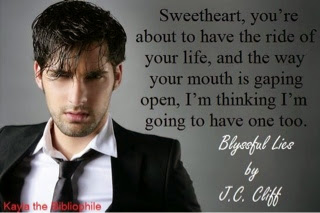 Nick sits down beside me, and he almost takes my breath away. He looks absolutely stunning. Even though he’s a handsome devil, I know he carries a big, red pitchfork. His persona screams debonair and suave, and his suit hugs his broad shoulders perfectly. He seems unequivocally radiant and contented, and his brown and gold-flecked eyes gleam with happiness. A waiter appears, interrupting my perusal of Nick. “Excuse me, sir. May I get your usual for you and a glass of wine for the lady?” “Yes, thank you,” Nick replies. Concerned my acting skills may falter at some point, I begin to grow nervous again. I hate this paranoia. I curse myself again for not taking at least one dose of Blyss today, just so I could be able to get through this evening without foible. Nick gently lifts my chin, garnering my attention. “What are you thinking about, love?” I steal a deep breath and think to myself, The show must go on. My lips curve into a small smile and I flirtatiously flutter my lashes. “Do you come here often?” Nick smiles with mild amusement, his eyes twinkling. “Yes, you could say that.” I don’t bother asking what type of wine he’s ordered. I’m sure I wouldn’t know the difference between a ten dollar, versus an eighty dollar bottle of wine anyway. I rarely drink, let alone indulge myself with expensive wine. “I also see you have a group of fans,” I comment as I wave my hand around the large room. “Every woman here seems to be eyeing you up and down, like you’re a famous rock star.” Why couldn’t you have taken one of those women instead of me? His grin broadens. “You seem surprised.” “What, the fact women find you attractive?” I shrug my shoulders. “I won’t sit here and lie to you, Nick. You are a very good-looking man. I’m sure you could have any woman you want with the snap of your fingers.” “Yes, well, you will never have to worry about other women. I’ve had a lifetime of them, biding my time until the very day I could finally have you.” He leans in closer, all playfulness pushed aside. “You are the only woman I want to come to me with the snap of my fingers,” he pauses, arching a brow, “and you are the first woman who’s wanted to tell me no.” The way he’s looking at me, pinning me down with his heated stare, I can feel the apples of my cheeks begin to warm. So much is riding on my acting abilities, namely my ass as I pretend to like this man and try building some sort of alliance with him.

J.C. Cliff is an independent author who strives to deliver a strong story line, keeping the reader captivated throughout. She loves the element of surprise, creating unique twists and turns while creating thrill and suspense. Oh yes, and lets not forget, making a little explicit romance happen in between. She’s a die hard 80’s rock’n roll fan, loves the ocean and salt water fishing. What does she do when she’s not raising kids, running a business, and doing all the tasks that come with being a wife and mother? You got it – writing. It’s the ultimate escape from reality when the ocean isn’t nearby. 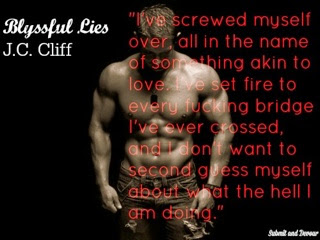 Huey Lewis & The News : Take me back in time

Foreigner : I want to know what love is

Exile : Kiss you all over

Def Leppard : Let me be the one

Eric Clapton : Anything for your love