KAYLA~ He moved in next door to me, all bronzed skin and lean muscle, with a panty dropping smile that could make any girl weep with need. He set my body and teenage hormones on fire for three years. THREE LONG YEARS.

In that time he became a cop- Officer Sexy as I liked to call him- and every time I pushed, he retreated. But I knew he felt it, I saw it in the way he looked at me. So one night I set my plan in motion and upped my game. I finally reeled the sexy bastard in, and he didn’t know what hit him.

COOPER~ She tempted me with her smart mouth and tight body for three painful years. I took an oath to uphold the law and honor it, which she made almost impossible not to break. But when the day finally came, I made her pay, every beautiful inch of her. She might drive me crazy and be the biggest pain in the ass, but she’s my pain in the ass. And I’ll spend everyday for the rest of my life making sure she never forgets who she belongs to.

You asked for our story and now we are going to give it to you. Cooper and I are not only going to share our special day with you, but we are going to take you back to a time that was frustrating, sexy, explosive and downright beautiful. Here is our story, from beginning to… forever.

This is a Novella with an HEA and is told in dual POV. It is the last book to the Men Of Honor Series. Although you don’t have to read every book in the series, I strongly recommend that the first book, Fighting Temptation, should be read prior to Kayla and Cooper’s story in order to understand many aspects of this book.

WARNING~ Due to mature subject matter, such as explicit sexual situations and coarse language, this story is not suitable for anyone under the age of eighteen. 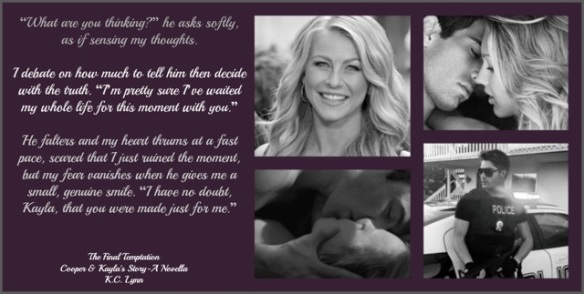 Throughout the Men of Honor Series, we have seen bits and pieces of Kayla and Cooper. We have seen them play matchmaker and relationship therapist for all of the other couples, now it’s their time. This is their story, from the beginning.

Kayla is the blond bombshell with a mouth to match. She is sassy, boisterous, and hot tempered. She acts on feelings before thinking things through, but she knows what she wants. She wants Cooper McKay.

“I am irrational and let my emotions get the best of me.”

Cooper McKay, town golden boy, amazing athlete, and deputy on the rise to Sheriff. He is level headed, caring, kind, and protective. He holds his temper in better than the rest of the Men of Honor alpha males, but he is just as alpha.

Cooper moved in next to door to Kayla while they were both in high school but Cooper was three years older than Kayla and knew he had to stay away until the time was right. This did not stop Kayla from tempting Cooper every chance she got. She pushed buttons and boundaries as much as possible trying to break Cooper’s resolve. After a heated confrontation, Kayla has decided it’s time to let go.

“I can’t let myself love him anymore, he already made it clear that I’m not good enough.”

Read to find out how Cooper proves his love for Kayla and prove that they are forever material.

I have read this entire series and have loved each book, this book is no exception. Kayla and Cooper’s story had me hooked by page two. KC Lynn knows how to write to get the reader involved immediately. I also enjoyed seeing an update on the rest of the characters as well.

The moment his control snapped.

We stare at each other for a long moment, the air thick with tension. His hands still grip my arms tightly when something passes between us, something powerful.

“You know what? Fuck it!” Then suddenly it happens, the one thing I have been wanting from him, for three long years. He kisses me, his mouth crashing to mine, hard, hot and demanding.

Oh god. My knees go weak and a whimper escapes me at the first sweep of his tongue. His taste—his incredible, masculine taste—floods my senses and sets my body on fire. I waste no time giving just as good as I get. My fingers weave into his hair with a grip that draws a growl from him and I match him stroke for every desperate stroke, taking what I have ached for, what I have dreamed about for so long.

Catching me off guard, Cooper picks me up by my ass and walks us a few steps. I hear a bunch of shit crash to the floor before my back suddenly meets the cold, hard surface of his kitchen table. We never break the kiss, our mouths devouring one another, our tongues dueling a beautiful battle of frustration and pure, hot lust. My lungs crave oxygen but I can’t stop, I don’t want to, I need more. I rip open his uniform shirt and the tiny buttons fly all over the place. My hands slip beneath his undershirt and roam over the smooth, hard plains of his abs.

With a groan he rips his mouth from mine, and starts trailing his lips down my throat. “You drive me fucking crazy!” he growls. “The way you torment my dick, prancing around this tight, little body of yours. Testing every measure of my control!”

And I finally snapped it. Thank the Lord! 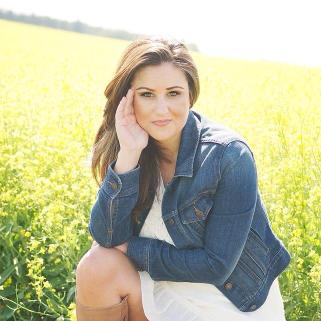 K.C.Lynn is a small town girl living in Western Canada. She married her high school sweetheart and they have four amazing children: two lovely girls and a set of handsome twin boys. It was her love for romance books that gave K.C. the courage to sit down and write her own novel. When she is not in her writing cave, pounding out new characters and stories, she can be found living between the pages of a book, meeting new tattooed, hot alpha males with very big…Hearts.

FREE now for a limited time 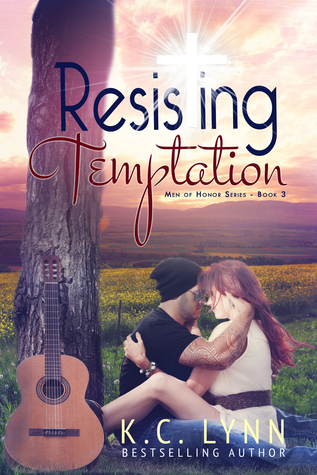