“She healed me. She broke me. I set her free. But we are in this together. We will end this together. The rules of this ancient game can’t be broken.”

He’s embraced what he always ran from, and now faces punishment far greater than he feared.It’s almost time. It’s demanding to be paid.

The Third Debt will be the ultimate test… 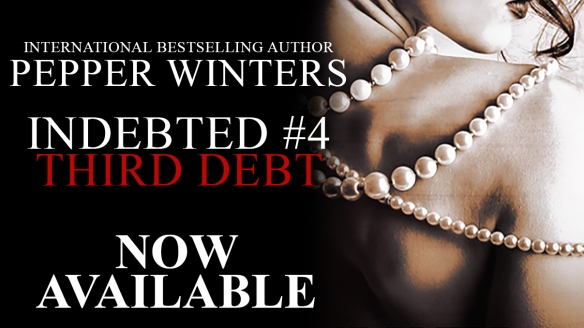 I’D GIVEN MY heart to my enemy.

There was no bottom to my affection. No limit to what I would do to protect it.

Jethro was mine and it was up to me….

I was no longer trying to save myself.

I was trying to save him.

Pepper Winters wears many roles. Some of them include writer, reader, sometimes wife. She loves dark, taboo stories that twist with your head. The more tortured the hero, the better, and she constantly thinks up ways to break and fix her characters. Oh, and sex… her books have sex.
She loves to travel and has an amazing, fabulous hubby who puts up with her love affair with her book boyfriends.

Her Grey Romance books include:
Destroyed