The moment I saw her, I wanted her.
I tried to resist her, but Race had other plans.
One night, in a moment of weakness, I gave in to my desires.

I still had a job to do before her world collapsed.
If I failed at finding the person behind the threats, I could lose her forever.

Temptation can be dangerous. 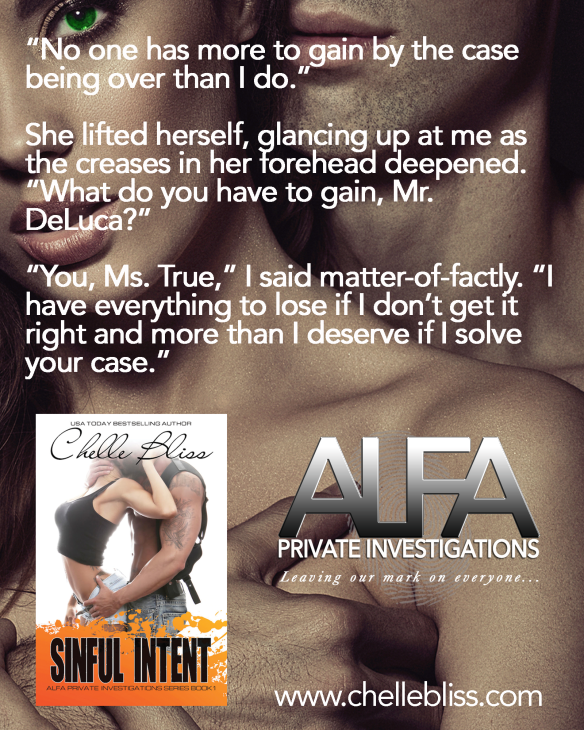 Morgan DeLuca is a cousin to the Gallo Family that we all know and love. He has been overseas serving with the military but has now returned home. But what has he returned home to? Drinking and lots of sex with lots of random women? Not if his mother has anything to say about it. After being at Izzy’s, his cousin, wedding, he is invited to come work for ALFA PI – ran by Thomas and James. He never though having a family was in the works for him. He loved women but didn’t ever see himself settling down with one.

“I had a simple life. Then this blond haired woman walked into my world with her attitude, sassy mouth, and killer body and wrecked everything.”

His first day on the job he gets his first assignment, Race True. He doesn’t get all the details of the assignment from Thomas and has to go meet with Race himself. Race has sworn off men after a bad ending to a releationship in college. She has no family to speak of after her father died and her mother blamed her so she chooses to throw herself into work. She has climbed the corporate ladder quickly, especially for a woman, and someone is determined to take her down.

The chemistry is undeniable between Race and Morgan. Suddenly this case is about more than the case itself for Morgan, it’s about saving this woman, his woman.

“You’re not going to leave me here tied up or some sh**, are you? ‘Cause I swear to God, I’ll kill you in your sleep.”

With his cousin doubting his ability to have a relationship with this woman AND solve her case, can Morgan prove him wrong? Can love overcome lies and secrets? Can Morgan and Race find their happily ever after?

I absolutely LOVED this book! Chelle Bliss knows how to hook you right away and keep you hooked throughout. I loved the Gallo Family so seeing them again was great but you definitely don’t have to read their books to understand this one (but I’d recommend it because who does love a family of alpha men and their sassy little sister?). I can’t wait for book 2!!!!

I stood in the doorway, surveying the bar and trying to pick Ms. True out of the crowd.

A woman peered up from her phone and looked back down.

Whoever she was, she was fucking gorgeous. She sat there with her spine straight, blond hair in a perfect bun, and a crisp black dress shirt tucked into a gray pencil skirt. Her high cheekbones almost kissed her deep-green eyes.

I wanted to saunter up to her, ask her for her number, and beg that on our first date she wear the red stilettos she had on, which made my cock instantly hard.

She glanced up, caught me staring, and waved me over.

Well, hell. Maybe she wanted my number too.

Her eyes remained down, concentrating on her phone, as I approached.

“Mr. DeLuca, I presume,” she said, glancing up for a moment, her emerald eyes flickering. “Take a seat.”

Disappointment flooded me. The beautiful creature in front of me wasn’t calling me over to get my number. She was my new client.

“Ms. True?” I asked, letting my eyes linger on her legs for a little too long but not caring.

Chelle Bliss is a USA Today Bestselling Author of the Men of Inked series.She loves to write happily ever afters filled with alpha males and sexy women.Chelle spends her days writing, chatting on Facebook, and working on her craft.The ALFA PI series a spin off of her Men of Inked series and she’s excited
to introduce a new world of characters to readers.