As one of the big names at his family’s gym, Legends, MMA star Rory Kavanagh is used to being in the spotlight—until a gruesome leg injury knocks him out of the cage. Rory is left feeling sidelined in more ways than one, battling the inner demons that come
with losing the one shot at his dreams. Then Clare walks into his life and
gives him a new dream: winning her heart. There aren’t many new faces in
Woodlawn these days, but this tough, beautiful stranger makes Rory want to get
his life back into fighting shape.
Clare Ivers doesn’t think she’ll be able to tell anyone what really brought her to the close-knit Bronx neighborhood where she just started bartending. But her life’s on pause and her
past is catching up fast, try as she might to move on—with new friends, steady
work, and a chiseled alpha male trying to get her attention. Even though Rory’s
more than a little intense, she can’t deny that her heart beats faster when he
looks at her with those soulful silver eyes. Clare thought she was done with
love, but Rory might just be man enough to show her she thought wrong.

“I really appreciate it, but you don’t have to give it to me for free,” Clare’s brow furrowed as she took the membership card from the spunky redhead.

“Oh, please, girl. I used to work busing tables at O’Leary’s Pub when I was in high school. Is Cian still in charge over there?” She smiled back as she continued putting Clare’s information into the gym’s computer system.

“Yeah, he’s my supervisor.” Clare nodded at the woman, slightly mesmerized by how piercing and blue her eyes were in contrast to the bright red wavy hair that flowed down most of her back.

“Then believe me, these self-defense classes can be written off as a work expense on next year’s taxes.” Both women snickered. Clare leaned against the counter, enjoying the interaction, since she hadn’t made any friends around her age in the three weeks she had lived here. Clare felt a pang of regret slice through her as she wished that an irritating boss was the only reason she needed self-defense classes.

“I’m Casey Kavanagh, by the way.” The redhead reached out her hand to Clare, who accepted it happily.

“Clare—well, I guess you already know that.” Clare pointed toward the driver’s license that Casey was still holding. Casey just smirked and waved her hand nonchalantly.

“So—Kavanagh? You’re part of the family who owns this place?” Clare tried not to sound like she was prying, but she was curious. She’d heard that name all over town since she got here.

“Yeah, my uncle owns it. Started it up back in the late seventies. It’s been remodeled lately, but we definitely still have the old-school reputation.”

“Oh.” Clare nodded, not sure what that meant or what to say.

“Here, you can have this back. I think I have everything in here now.” Casey handed her the license. “The thirty-day trial membership begins today, and then we can talk about different types of plans after you’ve had a chance to try out our various amenities and classes.”

“Thanks. Do you think I could have a peek around? See where the locker rooms are and stuff like that?” Clare tucked her driver’s license back into her wallet along with the new membership card, then stuffed the wallet into the small brown purse that was slung over her shoulder.

“Hell, yeah! Come on, let me give you a tour. Welcome—officially, this time—to Legends!” Casey popped out from around the back of the counter, motioning for her to follow.

“Okay, so here are the locker rooms. Men over there, women right here.” Casey started to point toward various doors they passed as the hallway opened up into a large room with an open floor plan.

“The entire far side of the room is pretty much for the fighters, not really anything but testosterone and ball sweat over there.” Casey slid her arm around Clare’s elbow to pull her along.

Clare giggled at Casey’s remarks and took in the view of dozens of men on weight-lifting machines, standing in front of weight benches, and in the rings. She had to agree, there was definitely a lot of testosterone in here.

“But over here is where things are a bit less noisy.” Casey led Clare to a side hall that opened into several small classrooms. A few of the rooms were filled with people doing group exercises; Clare recognized a yoga class and a spinning class.

“All the classrooms are walled in by windows, but the glass is so thick that you can’t hear all the noise from the rings.” Casey indicated an empty classroom that was at the back wall of the gym.

The door they entered through was set in a wall of all glass, just like the back wall of the room that gave them a view of the street. Clare strode toward the back wall, loving the openness and the view of pedestrians passing by.

“Of course! People are weird, which is fun,” Casey quipped, joining her at the window as they stood side by side.

“See, there’s an example of weird right there.” Casey pointed at a behemoth of a man crouching on the sidewalk with a large dog next to him.

“That’s my cousin, Rory, but he’s more like a brother. He works here sometimes, used to be a fighter but got hurt in the championships last year. Almost couldn’t walk again since his leg pretty much split in two. A year later, not only is he walking, but there he is crouched down, feeding a damn street dog.”

Clare watched more closely, and now she noticed the second dog. In front of both the man and the larger dog beside him was a smaller, frail-looking pup. It couldn’t be more than twenty pounds, although it seemed like it should be much bigger. The dog’s ribs were poking out of its side as Casey’s cousin slowly fed him a sandwich. He was careful to hold his hand out flat and she could see his lips moving from his profile, realizing he was probably coaxing the dog to accept the food.

“I think that’s sweet. I was studying to be a vet before I moved here.” Clare’s voice was soft as she admired the man’s kindness toward the stray.

The man stood and stretched a bit, opening up the other half of a bagged sandwich and then settling himself on the curb by the thin dog, who seemed more trusting of him now. In his new position, Clare could see more of his face and she realized that it was the same burly yet handsome man she had flirted with at O’Leary’s last night.

Of course, that was before he had broken her boss’s nose.

She felt a stirring in her abdomen as she watched him, her mouth slightly parting. The brown pup cautiously took a few steps to him, then sat and placed his head in Rory’s lap. Clare felt a glow as her heart warmed at the sight.

“I’m so not an animal person, but Rory would help a goddamn rat if he found one. That bigger dog there is his shadow, Ace. Barely ever see the two of them apart.” Casey stepped away from the window.

Clare hesitated, watching Rory and Ace for a moment longer, then pulled herself away to go follow her new friend. It had been a while since she had thought about her previous career aspirations, and a wave of sadness passed over her as she thought of the different trajectory of her life now. Maybe now that she was starting over, she could go back to school, she found herself hoping.

Breaking a Legend is the eldest brother in the Kavanagh family, Rory .  He was at the prime of his MMA career when a serious injury destroys his dream and in some ways his life.  He now spends his days swimming in whiskey, bars and sleeping around.  He also is hiding a secret while trying to hide his pain.

Clare Ivers has recently landed in New York from California.  She too has secrets which she hopes to hide from here in New York.  Praying she will never be found and wanting to be able to protect herself she finds herself at Legends, which once again she runs into Rory Kavanagh and the rest of the family as they are the owners.  She finds a job in a local bar and also works for an animal rescue.

From the first time Rory’s eyes landed on Clare he felt things he has never felt.  The face he couldn’t get out of his mind, is occupying his thoughts and for the first time in a long time Rory feels something he thought was long lost.

This book is sweet, steamy, suspenseful and of course full of Alpha Males.  What do you expect when you have a family of fighters?  Even Ace the dog won a place in my heart.

When pasts come back and troubles arise for both Rory and Clare, will they fight with everything they have or drop their fists and just give up?  Will two people who are scared to love ever let it in again?

I enjoyed this book.  Touching on substance abuse is a huge thing and I really do think it should be talked about more.  There were a few points where the story fell flat, but it wasn’t anything I couldn’t get past. A few things I feel could’ve been explored a little more, or not so rushed, where others could’ve been shorter.     Overall it was a good read.  We were introduced to characters in upcoming stories, which was done well and I am looking forward to reading their stories.   3.75  Stars for Breaking a Legend. 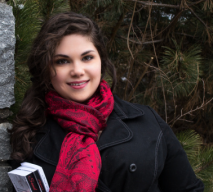 Sarah Robinson is the bestselling
author of The Photographer Trilogy and the Sand & Clay rock star series. A
native of Washington, D.C., Robinson has both her bachelor’s and master’s
degrees in criminal psychology. She is married to a local police officer who is
just as much of an animal rescue enthusiast as she is. Together, they own a zoo
of rescue and foster animals.
Website | Facebook | Twitter | GoodReads