Easton Hunter has a one track mind. Drag racing. He doesn’t require anything but the rush of adrenaline while on the race track. His nights are full of women and his days are full of racing. Life is going just as he has planned until a tragedy strikes his family. He is left to pick up the pieces abruptly turning his life as he knows it upside down.

Harper Dunn is finally hitting the big time. Everything that she has ever worked for is falling right into place. She is determined to take the world by surprise. Nothing gives her more satisfaction than proving someone wrong that doubted her, especially of the opposite sex. She has never been in love and isn’t planning on it anytime soon. That is until she meets three year old Samantha Hunter.

As competition gets steep not only on the race track but also in their hearts, they have to decide to take the leap of faith or walk away from the best thing either has ever encountered.

Can Easton and Harper resist temptation when it is standing right in front of them?

Especially when they are car to car on the race track?

Review by Kristin 3 out of 5 stars
Burnout is the story of two people in the drag racing world.

Easton Hunter is the “it” man at the track. The women love him and want to be with him and the men hate him but want to be him. He likes things easy, fast, and most of all unattached. Easton keeps people at bay because of his tragic past.

Harper Dunn is not only the new face at the track but she’s also the new GIRL in the drag racing world. She has dreamed of this her entire life. She has worked hard and with the support of her grandfather and mom, she has finally made it to the big leagues.

Can a girl make it in a “man’s” world? Can true love be found in the midst of competition?

This was a quick read but I felt like it lacked in the build up and details area. I felt like it was very wam bam thank you ma’am type of a book. The synopsis leads a reader to think there is more angst than there really is. I could tell the thoughts were there, just not verbalized with as much detail as I would have hoped. It was a good book just not my particular cup of tea and that’s ok.

She’s had to leave the baby with me a few times and it was a total disaster each and every time. I had to be rescued by Mal or dad all times due to a nonstop cry. Yeah, she doesn’t like me.

I would feed her, burp her, change her, and she would still cry nonstop as if I was a monster and she hated me. It would be the first female who didn’t like me. In all seriousness though, it kinda pissed me off. I had never been unable to master anything I had put my mind to. Damn it this was gonna be no different.

I continued walking her back and forth and then out the front of the motor coach trying everything and anything to get her settled. Dad and Mal had gone out for dinner to give Mallory a break so I knew there would be no one to rescue me.

I sat under the makeshift porch and swayed her back and forth just like Mal would do.

Samantha followed me with her eyes looking into mine studying me. I was already in awe of her but that was the very moment that I fell in love with her.

“You know what I think I am going to call you from now on?”

I paused waiting for an answer. No, dumbass, she isn’t going to answer you.

“Blue. I am going to call you Blue.” I smirked.

“Do you want to know why I am going to call you that?”

I waited again continuing to sway her just slightly while lightly patting her bottom and hearing the sound of the cushioned diaper as my hand met it.

“I’ll tell you… you have always screamed bloody murder every time I have held you since the very first time in the hospital 6 months ago. You would turn blue… the blue of the annoying dog on Blue’s Clues that you love so much. So… that is your name to me for now on.”

I slowly sat down in the chair that had been calling my name and held her as she slept in my arms peacefully. So this is what it felt like.

She changed something in me that very moment, as I watched her feeling safe in my arms. I had seen Mallory transform into a mother that the both of us never had in only a short six months. Here this little life was making me feel something I had never felt for another by not speaking a word. She was special. 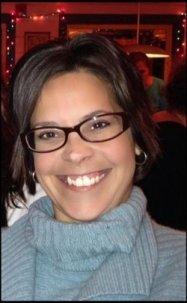 I currently reside outside of Austin, Texas. I’m a mother of 2 amazing kiddos and married to my gorgeous soulmate for almost 20 years. I have a full time job in the medical field but would rather be spending my time writing! I love to spend my free time reading, being outside and playing with my family and 4 fur babies. I started to write at the instinct of “hey maybe I can do that!” and haven’t stopped since. I have enjoyed every step of the journey. I am blessed to have very supportive friends and family that make my life worth living!