This week we are hosting C.A. Harms 2016 Yearbook! Revisiting all the novels that she published this year. Day 4 we take a look back at the Crazed Devotion Series, Key West Anthology and the Southern Boys Trilogy…
Always His (Crazed Devotion #1)
Contemporary Standalone 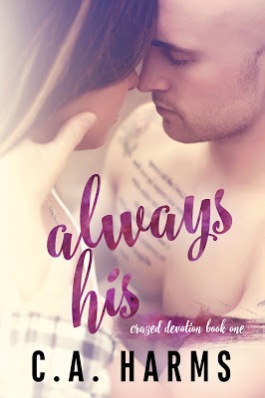 It isn’t always as easy as it sounds.

Becoming a Marine had been Ryker’s dream, but that dream faded when it led to losing the one girl who held his heart.

Returning to Alabama after being gone for more than five years was going to be hard, but he couldn’t continue to live without her.

His world seemed empty and there was only one thing that could heal that void.

Beg for her forgiveness…

And never let her go again.

She would always be his… 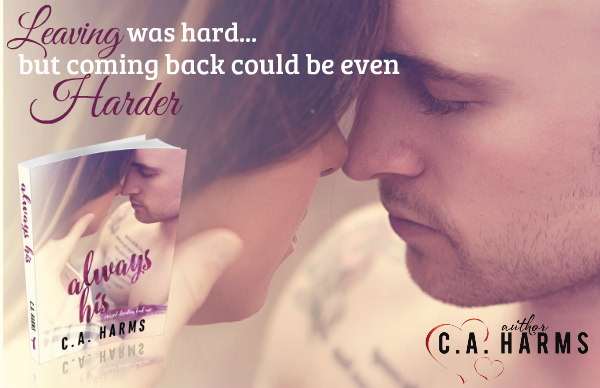 Forgiving Reed – Book #1
Kori suffered a great loss, one that left her feeling so desolate and alone, that she believed nothing would ever fill the void…
The only thing that kept her going was the one little piece of joy she still had in her life, her baby boy, Rhett. She had no choice but to move forward and give her son the best life she could. Which meant moving back home. Except there was one problem.
Home was where Reed would be…
The man who once held her heart, then shattered it into a million pieces.
Grieving the loss of Rhetts dad, and learning to forgive those who have betrayed her, Kori was battling it all. But will she ever have the strength to forgive Reed?

Finding Gavin – Book #2
Gavin was a broken hearted cowboy from Savannah…
The one she fell for even though he tried to warn her away. Maria’s entire life had been one rejection after another, always going after things that were just out of reach. Gavin was no exception.
She wanted him, so desperately…
But life had a way of making things unattainable, at least for her anyway. Just when things began to change, once again the darkness glooms, and Maria finds that her happy ending is again…
Unreachable. 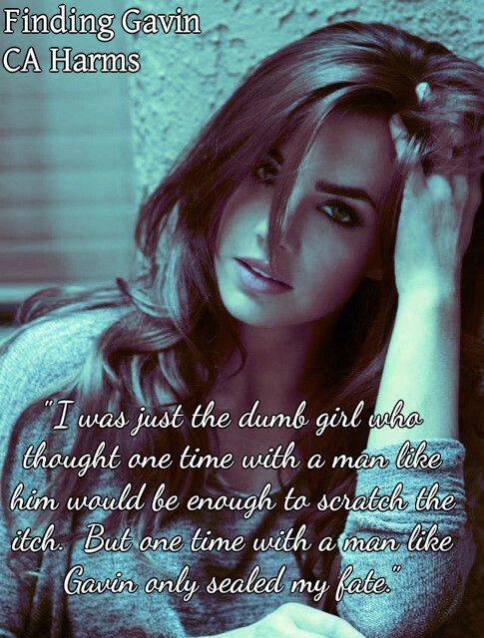 Loving Colt – Book #3
Alexis and Colt never planned on crossing paths.
Alexis and her three year old daughter were running from their past and Colt was looking for his future. Neither planning to find salvation in one another.
One night changed it all…
And they had no hope of ever being the same again. Finding a way to make things work, when it feels like everything is against them, is something they will have to work hard to overcome. Will Colt be strong enough to handle Alexis’ past?   Or will it be too much?

UNPREDICTABLE – BOOK #1
Have you ever wished for a moment that you could pretend to live the life of someone else? Escape the harsh reality that your own is anything but perfect?
Quinn Tucker had always been forced to put her own needs last. With an absent father and a mother who drowns herself daily in a bottle of Rum, there was no other option.
Jett Jameson was the distraction Quinn needed, even if it was just for one night. A void filler, and a chance for a moment to allow herself to feel something other than emptiness. He wasn’t what she expected. But now it was too late, there was no turning back.
Nothing would ever be the same… 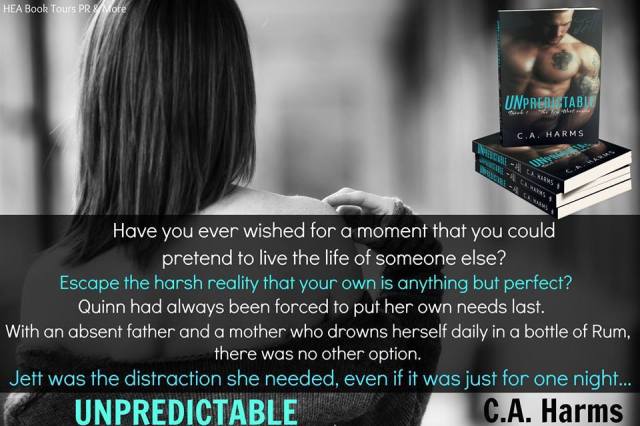 Harper Jameson, had built the necessary walls to keep her heart safe. Never again would she allow herself to become weak and vulnerable. Confident and full of attitude was a mask she wore that many fell for…

Except Easton Black. He was equally confident, cocky and knew what he wanted. And things he wanted rarely escaped his grasp. He was immune to the façade Harper had created.
She was Intriguing.
It was Inevitable and Harper could sense that there was no way out. Easton Black would no doubt be the man who could change everything.
People aren’t always as strong as they appear to be on the outside…

UNCONTROLLABLE – BOOK #3
Avery Nolan’s father has never been a part of her life. As a result, she finds herself becoming a caretaker. Always trying to please other people, willing to tuck her own concerns aside for the happiness of others. She is selfless.
On the outside, it appears Kade Thomas has it all, but no one can understand the guilt and ache he feels daily. He is haunted by his past. Every time he closes his eyes, he finds himself reliving the same nightmare, over and over again. He blames himself for the loss of Jenna. He pushed her too far and she paid the price.
Avery saw something special in Kade, from the first day she met him—she could feel it. But the darkness that consumes him is…
Uncontrollable.
Will she finally be the one to break down the walls he’s built around his heart and soul? Or will she find some walls are just Indestructible… 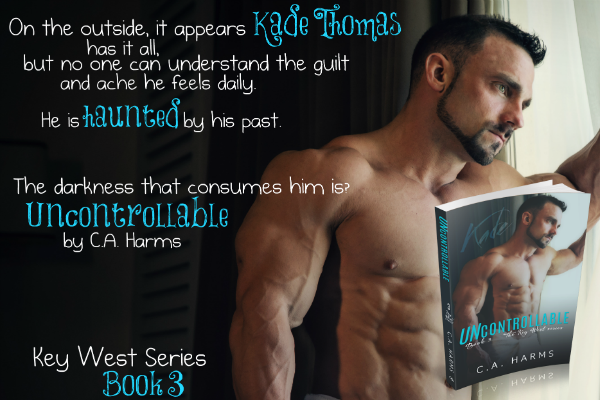 Family meant everything to Jude Calvert. He would do whatever it took to keep them safe and provide for them no matter what it took to make that happen. Even if that meant putting his own safety at risk, he had no other choice.
Callie Raine has always felt a heavy attraction toward Jude. He was fascinating.
He was undeniable. She knew there was so much more to him than he allowed anyone to see. But she was a headstrong woman and feeling weak was something she wouldn’t allow. Except when it came to Jude.
However, when Jude is hit with the unexpected and forced to rely on others, Callie realizes he doesn’t take weakness easily. He becomes even more withdrawn. More angry.
Will he finally give in and learn to lean on those who care? Or will he push them beyond the point of no return and once again be left to face his obstacles alone?

C.A. Harms is like any other addicted reader. She enjoys happy endings and HEA love stories. She hasn’t always been a lover of Romance and had once been addicted to a good Mystery. Just recently she has taken on a new liking and now is a full blown Romance novel addict.

She lives in Illinois and enjoys spending time with her husband and two children. You will always find her with her kindle or paperback in hand as it is her favorite pass time.

Thank you for stopping by today for Crazed Devotion Series, Key West Anthology and her Southern Boys Trilogy! Come back tomorrow for Day 5 where we showcase an author interview with CA Harms and her Tough Love and anthology Alphas & Fairytales!
HOSTED BY: