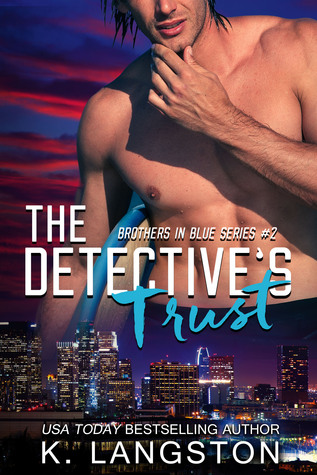 trust; firm belief in the reliability, truth, ability, or strength of someone or something.

LAPD Detective Reid Cunningham is content to keep the pain of losing his best friend buried deep. Dedicated to his job, he doesn’t have time to feel.

But when the past comes knocking at his door, he has no choice but to face his deepest and darkest fear.

Cassidy Sky, his best friend’s little sister, needs his help. Reid promised to watch over her and keep her safe, but he never planned on giving her his heart.

PLEASE NOTE: The author recommends reading The Officer’s Promise, an introduction to the Brothers in Blue, prior to reading the remaining five books of the series.

The Detective’s Trust is written from dual POV, with an HEA and no cheating. 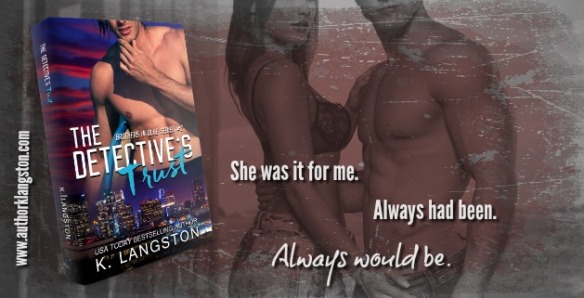 Once we were inside, I moved to the bed closest to the door and began emptying my pockets on the nightstand while Cassidy snatched up her bag with a huff and went straight into the bathroom.

When she walked out a few moments later, I knew for sure God was punishing me.

“What the hell are you wearing?” I asked, my dick hardening against my zipper.

She looked down at her chest, a grin smarting that sassy mouth of hers. “A shirt.”

One finger curled at the hem of my favorite Yankees shirt I’d had packed in my bag, the ball of her foot twisting in place while she licked her lips.

Luring me to the edge of a very steep cliff.

I wanted to know what that finger tasted like. No doubt it tasted as sweet as she smelled.

The kind you have to suck the sour to get to the sweet.

Every part of me wanted to devour every inch of her. Not to mention how good she would look underneath me. The images funneled through my mind in quick succession, one after the other. The countless ways I could make her mine. But the guilt still remained. Nestled somewhere between want and need.

I wanted her, but she needed my help.

Desire gnawed at my resolve, but I stayed rooted in place. Her dark eyes peeked up at me as she made her way over, determination heavy in her gaze. “You don’t like my shirt?”

“I know.” She stopped in front of me, reaching for my hand and placing it between her legs. “And so is this.” Standing on her tiptoes, her lips brushed my cheek, breath hot in my ear. “If you want it.”

The heat of her pussy paired with the damp fabric between her legs snapped my pathetic control. Leaning down, I captured her lips, her pliant body sagging against mine. My promise to Bodie was washed away as her taste flooded my mouth, a hint of tequila mixed with lime and a pound of need that rivaled my own. There was no more pain, no more guilt.

Raising my other hand, I brought it to the back of her neck, gently grasping the strands of her soft, silky hair before giving them a hard tug. Her head fell back with a gasp, breaking our heated kiss, and my mouth descended on her neck with greed, my fingers stroking over her wet panties.

“What do you want, Cassidy? And you better be very specific.”

She moved her hand to my cock, stroking and squeezing me through the rough denim of my jeans. “This specific enough for you?”

Her words fell on a whisper, stripping away any remaining hope of ever escaping what I knew deep down had been inevitable all along. 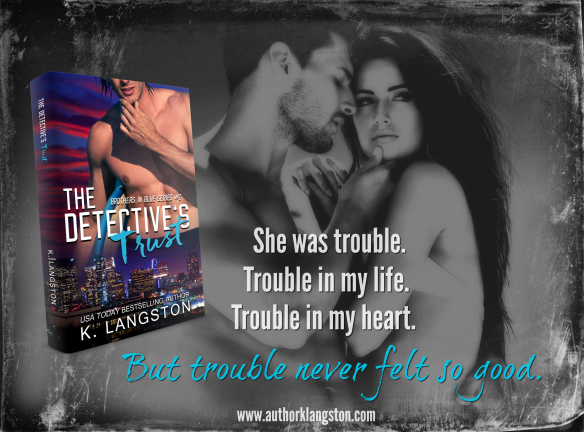 The Detective’s Trust is book 2 in the Brothers in Blue series and follows Reid Cunningham and Cassidy Sky.

Reid and Cass have known each other their whole lives but haven’t seen each other since Cass’s brother, Reid’s best friend, Brodie was killed because of his involvement and addiction to drugs.

When Cass gets a note alluding the fact that she may be in trouble she immediately goes on the run to the one person she knows will protect her at all costs…Reid Cunningham.

Reid carries a lot of guilt about things that went down in the his and Cassidy’s past but he also secretly carries his undying feelings for Cassidy.

Can Reid keep his need to protect Cassidy separate from his love for her or will the lines be blurred and hearts broken?

I LOVED this book. K Langston has no shortage of hot alpha men in her books and I can’t wait to see what’s next in this series!!