Ethan is the boy who climbed into my bedroom every
night.
He’s everything I love.
Laced with
everything I despise.
He’s every happy memory.
And every
shattered dream.
He’s my everything.
But he broke
every part of me.
I’m supposed to hate him.
But I can’t.
I don’t know
how.
ADD TO GOODREADS 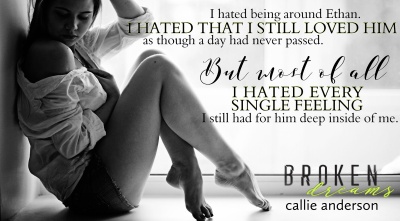 Callie Anderson’s newest novel Broken Dreams was the perfect second chance love story that had me completely hooked from the beginning!

Ethan and Leslie were neighbors growing up and high school sweethearts.  Leslie had a glimpse into Ethan’s life that no one else did and after she invited him to come into her room one night after hearing what was going on at his house, him climbing in the window became a regular thing.  They grew closer, inseparable really but their lives were about to go separate ways, Leslies dream and Ethan’s father’s legacy apparently.  But they had plan, one to be together.   One night shattered more than just their plans, it shattered dreams also.

Years later Leslie comes back to her hometown due to a family member’s illness and the past is so fresh in the present.  She didn’t plan on staying, but she felt she needed to stay and help her family.  She’s spent many years trying to put what happened in the past behind her, but nothing is really black and white.  When you step right back into the life you had before it’s hard to put aside feelings that are deep within your heart.  Then when the love of your life steps back in the picture along with it and it feels like nothing has changed, while in fact everything has.

This book was a super emotional, intriguing and suspenseful rollercoaster of a read.  I inhaled every page of Ethan and Leslie’s story.  It went from past to present which was needed so you could see how everything came to be.  I think Callie Anderson did an amazing job with this story.  Wasn’t as much as a tear jerker that we’ve had from her recently but definitely one that will sink its claws into your heart and not let it go till the last page!