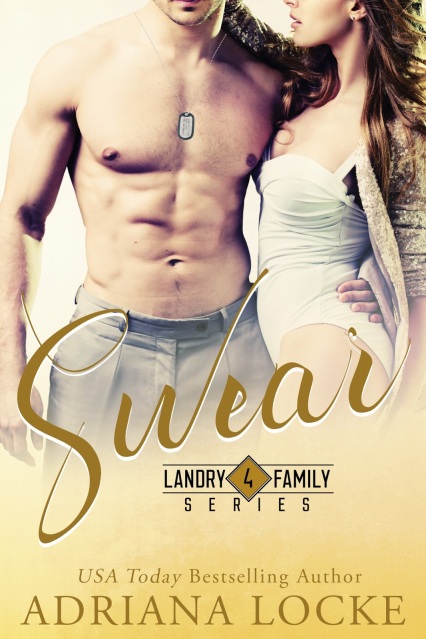 Ellie Pagan has a list of reasons to stay away from Ford
Landry.
It’s a mile long and was so much easier to stick to when he
was a world away. Now that he’s standing in front of her—body hard and chiseled
from a stint in the military, suit cut to perfection, and a smirk she could
never resist—remembering all the reasons why just got a whole lot harder.
Ford gets Ellie isn’t his biggest fan. He just doesn’t care.
Standing in front of him, giving him hell, she’s even
prettier than he remembered. All he can think about is how she felt in his
arms, the taste of her kiss, the sound of her giggle in the middle of the
night. He may not know how to win her back, but he does know this: he may have
let her go once, but that’s one mistake he won’t make again.
ADD TO GOODREADS
Join Adriana’s group for lots of Release Week Fun!

Our breathing quickens, the blues of his eyes growing stormy. A chill tears through me as he accidentally-on-purpose brushes his arm against mine. It’s like muscle memory, my body remembering exactly what to do around his.

My knees dip, my mouth waters, and I fight the ache in between my thighs as he looks down at me like it’s me he wants for dinner.

“What if I throw breakfast in afterwards?” he prods. “Does that make me, I mean it, more appetizing?”

That’s all it takes, that one little hint of arrogance, that brings me back to reality.

I flip him a smile. “It makes it less, actually.”

His own smile wavers. “I get that you probably hate me.”

“I want the chance to explain.”

“You have the same chances of getting the chance to explain as I do of getting what every woman wants.”

I lean in, like I’m going to tell him a secret. Whispering, I say, “Being able to eat all the pizza and not gain an ounce.”

Turning on my heel, I head to the back as his chuckle fills the room. “That was good. I’ll give you that.”

I shrug and keep walking.

“You can at least let me apologize.”

The authority in his tone, like I owe him something, stops me in my tracks. I whirl around to face him. “You don’t deserve a chance to apologize to me.”

“I didn’t say I deserved it,” he says earnestly. “But I would love the opportunity to do so.” He forces a swallow, my eyes glued to his lips. “I would appreciate the chance to get to see you again.”

The snicker that comes from me is unexpected by both of us. “So charming. I forgot how good you are with words.”

“Does that mean that’s a yes?”

“That means that’s a no,” I smile. “That means I’m not about to let you come in here and look at me with those bright blue eyes and make me forget what it felt like to have you rip my heart out.”

He flinches. “I didn’t mean to do that, Ellie.”

“Don’t act surprised,” I laugh angrily. “There’s no way you thought I just went on with my life after you left. I dated you for four years, Ford. And after what we went through …”

It’s me gulping now, the anger so palpable that I almost have tears in my eyes. My hands shake as I remember the fight that ensued after he told me he was enlisting.

“You left me,” I repeat, shaking my head. “So leave me again. There’s the door. Should I hold it open for you this time?”

USA Today Bestselling author Adriana Locke lives and breathes books. After years of slightly obsessive relationships with the flawed bad boys created by other authors, Adriana has created her own.

She resides in the Midwest with her husband, sons, and two dogs. She spends a large amount of time playing with her kids, drinking coffee, and cooking. You can find her outside if the weather’s nice and there’s always a piece of candy in her pocket.

For sneak peeks, giveaways, and more, please join Adriana’s Facebook Group, Books by Adriana Locke, or her Goodreads group, All Locked Up.