Come Back for Me, an all-new emotional and riveting
standalone from New York Times Bestselling author Corinne Michaels, is LIVE!

One night, eight years ago, she gave me peace.
No names.
No promises.
Just two broken people, desperate to quiet their pain and
grief.
In the morning, she was gone and had taken my solace with
her. I left for the military that day, vowing never to return to Pennsylvania.
When my father dies, I’m forced to go home to bury him.
At least I’ll finally be rid of his farm, which is grown over and tangled with
memories I’ve fought to forget.
And that’s when I find her. She’s even more beautiful
than I remember and has the most adorable kid I’ve ever seen.
Years have passed, but my feelings are the same, and this
time I refuse to let her go. They say you can’t bury the past, and they’re
right. Because when long-ago secrets are exposed, rocking us both to the core,
I have no choice but to watch her walk away again . . . 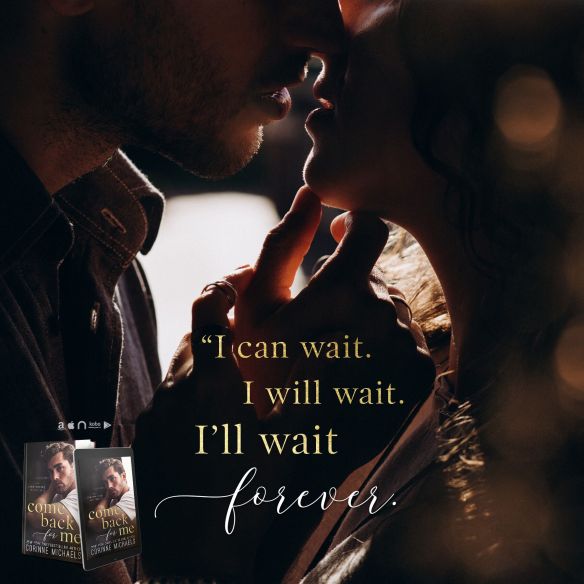 “She’s been mine this whole time, and now I have to wait until she’s ready for me – again.”

This book was beyond words amazing.

Ellie and Connor met previously – he was on his way out of town to join the military and she was reeling from the death of her parents and the impending (next day) wedding to her college sweetheart. One night of intense passion that stuck with both of them was all they would have.

Connor has returned at the forced hand of his father’s will. All of his siblings must live at the family ranch before they may sell it and move on. Connor, being fresh out of the navy and jobless, is the first up.

Ellie is married with a daughter now. Her husband is a true piece of work. Abusive, physically and emotionally. Although he has never laid a hand on their daughter, Ellie knows it’s only a matter of time. She has to leave now.

The connection between Connor and Ellie hasn’t faded, but she’s a married woman and he is only there for 6 months. Is there such a thing as fate? Can 2 people be destined and connected despite the many outside forces trying to stop them?

The only negative to this book was it ended. I know there are more in the series still to come and we will likely see Connor and Ellie again, but some books you just want to keep on going and this was one of those.

New York Times, USA Today, and Wall Street Journal Bestseller Corinne Michaels is the author of ten romance novels. She’s an emotional, witty, sarcastic, and fun loving mom of two beautiful children. Corinne is happily married to the man of her dreams and is a former Navy wife.

After spending months away from her husband while he was deployed, reading and writing was her escape from the loneliness. She enjoys putting her characters through intense heartbreak and finding a way to heal them through their struggles. Her stories are chock full of emotion, humor, and unrelenting love.