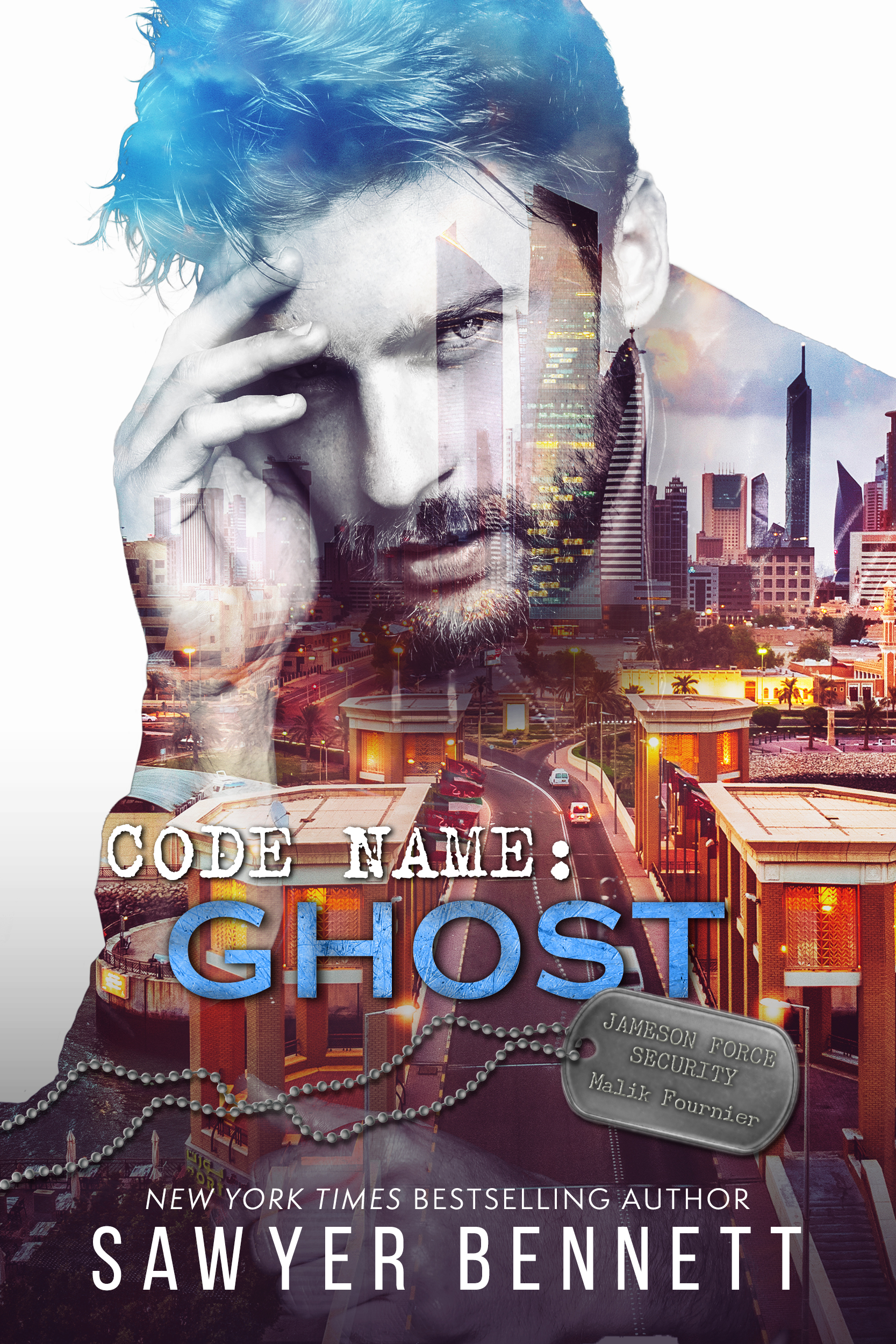 I knew the risks of this job when I signed on with Jameson Force Security. Knew my time as a marine would prepare me for the danger I would face. But no amount of training could have ever prepared me for the helplessness of watching my teammates die, the agonizing mental and physical pain of torture, or the despair of captivity.

Returning home to Pittsburgh following a mission gone wrong, I am riddled with guilt and haunted by nightmares. I spend my days trying to regain the parts of myself I lost in that desert, the pieces that made me the Malik Fournier I once was. While the physical effects of my torture are fading, the emotional ones are proving much more stubborn and I find solace from the last person I should ever seek such comfort.

Anna Tate lost even more than I did in that mission. Now a widow and a single mom to the daughter she gave birth to shortly after her husband’s death, Anna offers me comfort I don’t deserve. As my feelings for Anna grow, I worry that once she learns the truth about what happened, she’ll turn her back on me.

I pull her to me just as tightly as I push her away. Hoping this forbidden love will save me from the ghost I’ve become.

END_OF_DOCUMENT_TOKEN_TO_BE_REPLACED

Devney Maxwell has been my best friend since we were six years old, but she has no idea I’m in love with her.

Even when I’m on the road playing professional baseball, she’s my home—the only one I’ve ever known. But when I return to Sugarloaf to care for the family farm, I discover she’s trying to talk herself into a life with the wrong man … and I become desperate.

It only takes a single, perfect kiss to change everything.

I have six months to get it right with Devney—to convince her to leave this town and turn that kiss into forever.

I aim to do just that as I spend my days coaching her nephew’s baseball team, fixing up the farm, and loving her with all I have. Finally, it seems like our relationship is secure and we’ll find a way to make it work.

Then tragedy strikes … changing her life forever. She’s needed here more than ever, but as for me—there’s no way I can stay.

I know she’s the one for me, but I might have to let her go …

END_OF_DOCUMENT_TOKEN_TO_BE_REPLACED

Big-city veterinarian Holden McKenzie is back in Honey Creek, Tennessee and he has a proposal for his old friend Sophie Bates.

For Samuel Grayson, everything is black or white.
As a funeral director, there’s no room for in-between. He’s accustomed to
dealing with life and death, though he’s definitely more comfortable with the
latter. Especially when it comes to a chaotic, petite, feisty ball of energy.
Freedom Rayne. Samuel’s pretty sure her goal is to make his life hell, or so it
appears. When Samuel boards a flight to Las Vegas for his sister’s wedding, the
last thing he expects is to share it with the one woman who drives him crazy.
Freedom is eccentric and completely content
with it. Floating around from job to job, she finds peace and tranquility in
everything she does, including tormenting poor, uptight Samuel Grayson. When
she finds herself on the same flight as him for her best friend’s wedding, she
sees this as the perfect opportunity to get under his skin, something she tries
to do every chance she gets. The problem is the more time she spends with him,
the more she likes him.
What happens in Vegas stays in Vegas, right?
Not for Samuel and Freedom. Will they be able to forget about their trip when
they return to Rockland Falls? What if one mistake turns out to be the best
thing ever?
ADD TO GOODREADS

END_OF_DOCUMENT_TOKEN_TO_BE_REPLACED

Saint Sophia the Mother of Orphans, help us!

Connor Callahan, once a North House teen who shed his own blood to become a Brother of Ink and Steel, is now a powerful attorney and the Twin Cities’ most eligible bachelor. He challenges stereotypes and melts panties with his rugged good-looks, colorful tattoos, and brazen piercings. When he’s handed the case of a lifetime with the promise of partnership in the firm he’s dedicated his career to, he knows his destiny is close.
Then he gets a glimpse of the familiar Saint Sophia pendant his opposing council wears, and he finds himself wondering… could it really be her, the girl he met as a teenager? He never thought he’d see the blond whirlwind again after she blew in and out of his life, but she was wholly unforgettable. Like a tattoo over his heart. If only he could get close enough to be sure it’s really her… but she’s never going to let that happen.
Elle Hayes despises the formidable Mr. Callahan and everything he stands for. Though he puts on an immensely charming act—and is hotter than the desert sun—she knows he’s a fake. There’s no way she’s going to let Callahan interfere with her objective: finding a home for the vulnerable orphans his client has torn apart.
Then an unexpected set-up has Connor and Elle playing house together for a week…
As the tension—and heat—revs up between them, they discover that they each have a whole lot more to lose than just a court case. Their hearts are on the line—and so much more.
But to experience the greatest things in life, we have to take the greatest risks.
RISK Brother of Ink and Steel (Book 4) is a standalone novel. There’s no need to read the earlier titles beforehand, but this book features charming cameos by title characters from the Brothers of Ink and Steel and True North Series. You’ll want to go back and read them all.

END_OF_DOCUMENT_TOKEN_TO_BE_REPLACED

Ralph
Being traded to Dallas was a dream come true. I had everything I wanted, my game had never been better, and my wife was due to have our baby any day now.
What could go wrong?
Everything.
I was now raising our baby on my own. After hockey practice and games, I didn’t have time to sleep, let alone make sure my social media was up to par.
I never thought I’d get a second chance at love.

When my hotshot brother was drafted in the NHL, he didn’t have time to do his social media, so I took over for him. Little did I know it would become my career.
My plate was full with over fifty NHL players, and I wasn’t taking on any new clients.
Yet when he showed up on my doorstep with the cutest little girl in the whole world, I couldn’t say no.
I was just helping, but it turned into more than that. He’s the man I’ve been waiting for.
All it takes is one touch, one night, one chance, and only one kiss.

Booth Pena definitely didn’t make the smartest of decisions
when he was a teenager.
At eighteen, he knocked a girl up and signed up for the
military all in the same day—signing his life away in more ways than one. Fast
forward six weeks and he’s in bootcamp learning that he’s going to be a father
while also learning that not only is he going to be deployed, but it’s going to
stay that way for a year.
There weren’t a lot of things that the baby’s mother and he
saw eye to eye on after that. He honestly wasn’t sure why he even slept with
her in the first place.
Okay, that last part is a lie. He knows exactly why he slept
with her. Because the real woman he’s in love with, her twin sister, Dillan,
won’t give him the time of day.
Five years later, and he still wants her.
Now he’s home for good, being the best father and police
officer that he can be, and still he’s not good enough.
***
Dillan Davidsdottir hated Booth Pena. Immensely.
She hated him because he slept with her sister, then left.
Granted, she knew that he hadn’t meant to leave like he did, unknowingly and
unconsciously leaving his daughter behind, but that didn’t change the fact that
he had.
Five years later, and she still dislikes him just as much
now as she did when he chose the wrong sister to take to his bed.
Maybe if he’d chosen her, her heart wouldn’t be broken, and
his wouldn’t be untouchable.
But when a SWAT officer sees his life flash before his eyes,
and decides that enough is enough, what’s a girl to do?
Give in, that’s what.