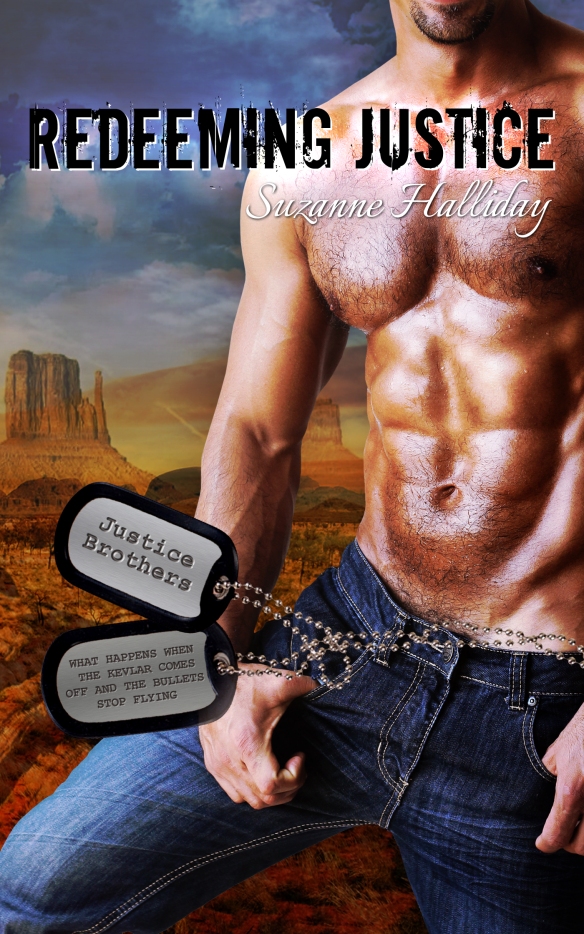 Sometimes …Happily Ever After comes with a price

Alex Marquez wears many hats. Sometimes he’s the slightly patrician Don of a family with deep Spanish roots. Other times he’s a brilliant tech-God and CEO of an exclusive security agency. He’s also a boss, a musician, and a fierce friend. At the core though he’s a former Special Forces Commander, wounded in action, haunted by the heavy burdens of regret and what ifs that linger to this day. For him, personal redemption would never come. Too much darkness, not enough light.

And then Meghan O’Brien swoops into his life. She’s a ball busting curvy goddess who instantly pushes all Alex’s buttons.

When ghosts from the past threaten to destroy their relationship, Alex pushes her away. Meghan has a promising life ahead while his was blown to bits in a war zone. Hurt and bewildered, she comes to realize that loving Alex as she did was not a guarantee of an easy future. He had demons and if she took him on, those nightmares and the emotional aftermath were going to be coming along for the ride.

Was the redemption Alex sought to be found in her arms? Would finding his soul through the love of another finally send the demons packing and lay the past to rest? 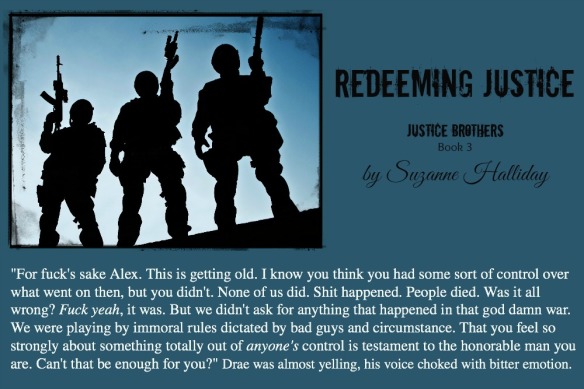 From the very start I fell in love with the Justice Brothers in the first book with Cameron and Lucy, but I think Alex just stole my heart and RAN!   This series seriously just gets better and better and you cant help but become addicted to these boys.

Each Prologue starts the same, but from each brothers perspective of what happened.  In this third book we see Alex’s story.  The guilt Alex carries surrounding the bombing that nearly killed him and took many of his fellow soldiers as well as civilians weighs heavily on him.   In all the other books Alex was always the voice of reason, but his story is filled with so much pain and so much more emotion then the others.   My heart seriously hurt for him.

Meet the girl…. Meghan.   Meghan was Alex’s “pen pal” per se after the bombing.  They wrote letters back and forth and kept in contact after the accident.   She was engaged to one of the guys who passed away during the bombing and Alex was the one who wrote her about “The Kid”.    She is a straight forward girl, who is comparable to a shining light.  She pushes Alex’s limits but its only to help him through his grief.  Who knew that during these letters  back and forth that they would find a connection and start to  fall for each other.  But no relationship is ever all rainbows and unicorns is it?

Can Alex overcome the guilt and move on with his life?  Or will he let go, but never forget and let Meghan in and start living life again.  He makes a lot of mistakes along the way, more so then his brothers.   But has he made one too many and pushed so far that Meghan wants nothing to do with him?

I love that you catch up with the rest of the Justice Brothers throughout this book.   No one can forget Cam or Drae, these boys get into your heart and just stay put.   Stubborn men!  She does a great job with each character and I hope for more from Suzanne Halliday!

Book One in the Justice Brothers Series is on sale: 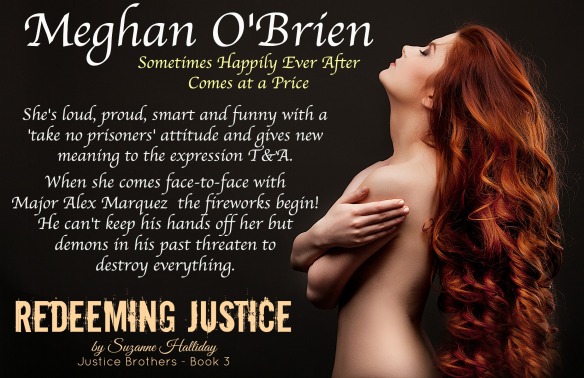