We were born into the same crowd.

His father: a useless drunk. My mother: a psycho junkie.

We lived across the road from each other.
We became best friends when I was only ten.
He became my sole reason for breathing.Seven years later, he forgot about me.

I don’t know the exact moment he changed.

Suddenly I was just the girl next door, and he no longer cared.
He didn’t want to be in my life. He didn’t want to help.
He ran off the rails, tossing me aside.
I no longer mattered. Nothing we shared did.The next thing I knew – he was gone.

Ten years and I didn’t see or hear from him.

END_OF_DOCUMENT_TOKEN_TO_BE_REPLACED

This isn’t the man I married.

I wish I could tell you the exact moment he fell out of love with me.

This is the part where I’m supposed to turn back around and run… But I don’t.

END_OF_DOCUMENT_TOKEN_TO_BE_REPLACED

USA Today Bestselling series now together in one complete set.

You fell in love with them.
You fought alongside them.
You hated them.
You cried for them.Now their story is in one place, for a limited time only.When billionaire playboy Marcus Tandem’s grandfather died, he left only one condition in his will – if Marcus wants to keep the business, he must be married. Determined not to lose everything he’s worked for, Marcus is left with only one option…find a wife.

She falls for the charming man, believing she has found the one. He sweeps her off her feet, letting her believe the lie. But the moment the ring is on her finger, a monster is born. Determined to stick by his side, Katia fights for the marriage she believes in. She’s in love with him.

Then she finds his Grandfather’s will. And hell is unleashed. 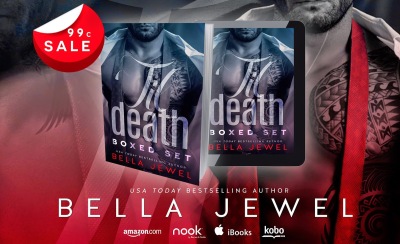 END_OF_DOCUMENT_TOKEN_TO_BE_REPLACED

Intended for mature audiences only

I met him before I knew.

I loved him before I knew.

I didn’t know he was my stepbrother when I fell for Bladen. I fell for a
mystery guy who I spent a long, amazing weekend with. Then he got up and left
me, without even a goodbye. I was nothing more than a bit of fun.

He broke my heart.

I didn’t see him again.

Until my mom and her new husband, Jack, decide to take us all on a family
vacation to the lake so I can meet my new stepbrothers for the first time.

I don’t see it coming.

When he gets out of that car, my world stops. My passionate lover is…my
stepbrother.

He isn’t the same man. He’s a prick and he makes sure I know it.

I’m not the same woman. I’m in love with him and I very much plan to make sure
he knows it.

He won’t make my life easy. I won’t give up.

END_OF_DOCUMENT_TOKEN_TO_BE_REPLACED

My mother’s name is Taylah, and once, a very long time ago, she was my best friend – she was everything I wanted to be.

Until the night she disappeared.

Ten years on and my life, my families lives and the world around us has never been the same again.
How can it be when you are left not knowing?

No leads. No connections. Nothing. Just pure emptiness.

My dancing is the only way I can separate myself from the pain that lies in my home, in my father’s eyes and in my brother’s spirit. They need me and I’ll fight with everything I am to be there for them, but who will be there for me?

Then I meet Nate.

Champion Motocross racer and everything my father doesn’t want for me. He’s forbidden, he’s beautiful, and he’s carrying a bundle of his own secrets.

When I step into his world, there is no turning back.

He will consume me.

He will teach me how to breathe again.

He will put a tiny piece of my broken heart, back together.

Bella Jewel is an Aussie girl through and through. She spent her life in Western Australia, growing up in many different areas of the state. She now currently lives in Perth with her husband, children and mass amounts of pets. She’s crazy, fun, outgoing and friendly. Writing is her passion, she started at the young age of 18 but finally got the courage up to publish, and her first novel Hell’s Knights was released in August 2013.

♦6 Biker Books from some of today’s bestselling authors in 1 Unbelievably Awesome Collection!♦

“Wanna take a ride, sugar?” His voice is thick, husky and laced with the sexual tension that is radiating between us.

After enduring a tough childhood, Lacey has spent her life running when things get too hard. When her boyfriend hits her, she runs again and ends up in Alabama.

She meets Mayhem MC Vice Pesident, Roam, and falls hard and fast. When curveballs are thrown and lies are told, will Roam be able to convince her that it’s time she started Fighting to Stay?

“Baby, it’s always been you. Always.”

Madison Cole’s family is the Storm Motorcycle Club. Two years ago she walked away from them and the world they live in. Jason Reilly has sacrificed a lot for the Storm MC, and two years ago he made the biggest sacrifice of all; he gave up the woman he loved for them. Now they’ve been thrown back together; can they overcome their past and discover love again or will the harsh reality of their world break them both?

A Girl On The Run

Her father gave her one task before he died – deliver a package.

Now she’s got the baddest biker in the state after her – He wants what she’s got.

Secrets of the past and present threaten to destroy everything she’s worked for.

A dark love, a jagged past, two worlds will collide to make something explosive.

Ana Belle never wanted anything more than to hang up her apron, jump on her Vespa and ride off into the sunset, leaving Sugartown in the dust.

Elijah Cade never wanted anything more than a hot meal, a side of hot arse and a soft place to lay his head at night where he could forget about his biker past.

She’d be willing to hand over everything tied up in a big red bow, but when Elijah’s secrets come to light, their relationship is pushed to breaking point.

And you thought small towns were boring.

“I’d love to taste you right now, babe, but my woman wants me to fuck her, so that’s what I’m gonna do.”

Zara Edgingway is a twenty-six-year-old secretary and about to face her next obstacle in life, the one she ran from six years ago: her ex husband.

Talon Marcus is the president of the Hawks Motorcycle Club. For two years, he’s had his eye on the quiet, yet sassy, neighbor Zara. The time has come were she’ll need, not only his protection, but the help from his biker brothers. Now, if only she’d stop fighting him along the way.

“Princess was my Juliet and I was her Romeo – I would give my last breath for her.”

Ryder wants inner peace and freedom from the torment of his childhood. Adopted by the Scorpio Stinger MC after a stint in juvie, he owes his life and loyalty to his brothers. What he doesn’t want is a judgemental, smart mouthed princess who thinks she is better than him. Jade, a newly qualified lawyer, wants a man who is perfect for her and will give her the charmed life she is accustomed too. She doesn’t want a demanding and foulmouthed biker in her life. But neither can get the other out of their head. Their undeniable chemistry is off the charts. Ryder wants Jade, but she has a secret that will stop them from ever being together. Until one fateful night when Ryder rescues Princess on his metal horse. Can they resist one another? Can two people, so different in every way, find love? Or will their different worlds collide and tear them apart?

“Princess was my Juliet and I was her Romeo – I would give my last breath for her.”

Buy the Book :  Will be updated as soon as available.

Fall in LUST with this steamy box set, brought to you by 10 of todays Bestselling Australian authors.

Welcome To Sugartown by Carmen Jenner

Tears of Tess by Pepper Winters

You Can Call Me Miranda by TJ Hamilton

Maybe This Time by Chantal Fernando

Give Me Love by Kate McCarthy

LUST will only be available for a strictly limited time