This week we are hosting C.A. Harms 2016 Yearbook! Revisiting all the novels that she published this year. Day 1 we take a look back at Olivia’s Ride and Trinity’s Trust from her Sawyer Brothers Series and Rush from her Montgomery Men Series… 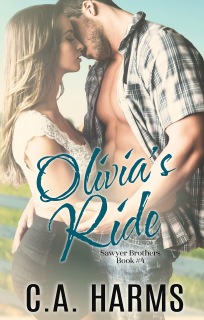 Title: Olivia’s Ride
Series: Sawyer Brothers #4
Keeton Pearce hadn’t lived a life full of supportive, loving family…
In fact, it was just the opposite.
He had been on his own for so long he had no idea what it felt like to belong. He didn’t want to rehash the life he left behind, or even think about it. But the hate from his father followed him, slowly eating away at the life he had begun to build for himself.
Olivia Sawyer had been prepped on how to deal with the advances of those college men she would encounter…
After all, she had been surrounded by three alpha men who made sure she knew just how to handle herself. But when she met Keeton Pearce, all those words of warning flew right out the window.
For the first time she had nothing to say. She was caught up in those eyes and that dimple.
The Sawyer attitude no longer gave her the ability to be immune.
Neither of them counted on meeting each other. It was by chance, and no one expected that one moment would change their lives forever.
For the first time in his life, Keeton had hope.
He felt like he had found where he belonged.
But would he survive the interrogation of an overprotective father and the watchful eyes of Jackson and Noah?

Or would Keeton run for the hills, fearful of…the Sawyer Brothers?