Stacia Palmer had one goal in life–to become an NFL quarterback’s wife.

For the past three years, she’s seduced her way through the university’s football line-up. But when she finally has a quarterback fresh off the draft, Stacia experiences a shocking change of heart. One that sends her back to the place she never thought she’d return to.

Once there, she finds that no one believes her. Least of all Pace Larson, her sexy on-again off-again ex who has never quite gotten over her leaving him for someone else. Of course, he’s now the starting quarterback and determined to claim her as his prize.

But can Stacia give him a second chance when he’s toyed with her emotions into the fourth quarter? Or will they run out of time?

Silver is the fifth book in The All That Glitters Series by K.A. Linde and is Stacia’s story.

Stacia has always been that girl.   Flighty, does bare minimal in school, cheerleading, boys and always wanted to be an NFL Quaterbacks wife.  With her endgame in sight of becoming that wife, she didn’t need to focus on schooling, it wouldn’t matter she would have her husband to fall back on.  But what happens when plans change?  When all the sudden something just clicks and you know you aren’t happy and you want more?

Pace Larson is the dreamy quarterback.  He plays for LV State and hopefully heading to the draft after this season.  He is such a smartass, demanding, funny and very protective of those he cares about.  He had a rocky past with Stacia and even though he is not “part” of her life anymore, he is still fiercely protective over her and it is clear as day that this boy wants back what he lost.   When Stacia needs help Pace is the first one in line and he doesn’t intend on backing off.

The road isn’t easy.  Each of them have their own dreams and seem to be heading in different directions.  Stacia is finding herself and who she wants to be, focusing on her dream and during the process also finding out where her heart is meant to be also.  It was great watching it all unfold in the pages of this book.

I loved that we got to see the old gang in Stacia’s book.  Trihn and Bri are as loyal friends as ever and both have grown up so much.  The friendship they have with Stacia is bar none that’s for sure and the type of gals any girl would be lucky to have as friends.

Silver wasn’t as angsty as the rest of the series and since I kept expecting the hammer to drop I was a tad disappointed  when it didn’t but it certainly didn’t stop me from enjoying the story!!!   4 out of 5 Stars

END_OF_DOCUMENT_TOKEN_TO_BE_REPLACED

**Warning: this book contains an additively filthy alpha male who will dampen your panties and own your days and nights. Proceed at your own risk.**

Book 2 in the Filthy Beautiful Lies series.
I never expected to watch Sophie walk away. She was mine. I would own her. She just didn’t know it yet.
New goal: Seal the deal and rock her world so thoroughly she never wanted to
leave again.

See where it all started in Filthy Beautiful Love 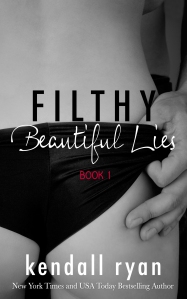 Reviewed by Shera 5 of 5 Stars!

Filthy Beautiful Love is the conclusion of Colton and Sophie’s story of this series.

“Im tangled up in you. I cant let you go” – Colton

Sophie now knows Colton’s Secret and she runs, she runs far away, infact to another country with her sister. She’s undergone a round of treatment and is feeling somewhat better. Colton is having none of it and hops on a plane with Pace to go halfway around the world just for a chance for Sophie to hear him out.

Sophie does return to California and is battling with the war in her head on what choice to make. She knows the truth, can she continue on with him knowing the truth. Knowing that the man she lives is in a relationship with someone. Can she trust him enough to know that he will do the right thing? Will she stay, or will she go?

“I hate how damaged he is, and Im the only one just understanding the full depth of it in this moment. Hes normally so assured, so demanding, that this tender side of him is completely unexpected” – Sofie

We learn everything Colton, his past, his current and just how much he is willing to give up to show Sophie how much he wants her in his life. He never thought he would find love again, but he’s going to have to work for it especially now that all his cats are out of the bag. Can he open up fully, can he give ALL of him to someone, will he give it to the girl he has fallen madly in love with??

I loved the conclusion of the story and getting closure on their relationship. It was great to get to see more of the other characters, Kylie and especially Pace. Oh Pace has one hot story there and I cannot wait for Filthy Beautiful Lust. That piece of hotness has one steamy story coming im sure. Being is a player and has no trouble getting women, he’s going to have one hell of a time finding one to stay. Then you know we will still have Collins. I’m seriously dying to hear about both of them

The series had moments of laughter, hot sex and total heartbreak all by the end of book one I was feeling raw, during book two it happened again but then was completed, packaged and wrapped up like the perfect present. I loved Colton and Sophie’s story and I cannot wait to hear about his brothers as I am sure they are just as complex as Colton, if not even more so.

Thank you Kendall for not making us wait too long, because you know we were all hanging by a thread dangling like ragdolls after book one. I give the conclusion of their story 5 stars, because I just simply loved both books. These were my first Kendall Ryan books and will certainly not be the last.

END_OF_DOCUMENT_TOKEN_TO_BE_REPLACED

Pace Drake loves sex. He knows where get it, what to say, what to do, and he makes no apologies for satisfying his needs. But when he meets single mom, Kylie Sloan, he’s enthralled by her, and begins to question his standard operating procedure. After all, there’s no chase, no mystery when banging a woman in a nightclub bathroom. Kylie’s depth and determination make the sloppy, drunken hookups that fill his weekends seem empty and shallow. She’s the opposite of the desperate, clingy women he’s used to. She doesn’t want or need anyone to take care of her and that only makes him want to care for her more.

Kylie’s trust in men has vanished. The last guy she was with played ding-dong-ditch-it with her uterus and left her with a baby to raise. Now her infant son is the only man she has time for, even if she misses sex and intimacy more than she’d ever admit. Opening her heart up to a younger man who’s best known for no-strings-attached sex and his casual lifestyle is probably the worst idea she’s ever had. But Pace wants to prove to her there are still a few good guys left, and watching the sweet way he interacts with her baby makes her want to try…but she can really trust that his days of hitting it and quitting it are in his past?

Pace
I take a sip of the liquor and immediately decide drinking is a bad idea. I’m already on edge and frustrated. The alcohol will only make me obsess more. Abandoning the glass, I sit down in a leather chair across from Colton and let out a heavy sigh.
“Tell me about Kylie.”
His gaze narrows. “Fuck no. You and Kylie?” He shakes his head, rising to his feet. “No.
Abso-fucking-lutely not. If this is what you came here to talk about, you can leave now.” He points to the door, his expression unwavering. Goddamn “You’re no fun.” Changing my mind, I stride over to the cabinet, pluck up the glass and down the rest of the drink. It burns like a mother fucker on the way down, but it’ll do the trick, numbing whatever this weird sensation is inside my chest.
“I’m serious, Pace.
She’s a good girl. She doesn’t need to get tangled up in your…ways…”My ways?” Now I’m getting pissed. He’s saying I’m not good enough for her.
“Hit it and quit it. Pump and dump. Whatever you want to call it, it’s not happening. Not with Kylie.”
“I know that, asshole.
I wanted to take her out – like legitimately take her out to dinner. Enjoy her company.”
He frowns at me again, that crease in his forehead deepening. “You’re telling me you don’t want to fuck her?”
“Don’t be a dumbfuck. Of course I want to. But I’m just saying that I wouldn’t hit it once and never call her again.”
“What would you do, then? Move in? Marry her? Raise her son?” he challenges.
“I haven’t thought that fucking far ahead. Christ.” Now I’m suddenly pacing the floor of his office and I have no idea why. This entire exchange is stressing me out. I came
here hoping to get her number, and instead I’m getting grilled like a steak.
He’s pulling the older brother card on me like he does so often. The dick.
“And that’s exactly why I don’t want you messing around with her. You don’t have a plan. Kylie needs a man with a plan. Not one with an agenda that only includes getting his crank yanked.” I sink down into the chair, hating this concerned older brother act.

Kendall Ryan is the New York Times and USA Today bestselling author of contemporary romance novels, including Hard to Love, Unravel Me, Resisting Her and When I Break.
She’s a sassy, yet polite Midwestern girl with a deep love of books, and a slight addiction to lipgloss. She lives in Minneapolis with her adorable husband and two baby sons, and enjoys hiking, being active, and reading.
Visit her at: www.kendallryanbooks.com for the latest book news, and fun extras