When the woman you love is lost, how hard will you fight to get her back?

Following the birth of her daughter, Kadence Knight finds herself in a battle she never prepared for. With desperation and unhappiness threatening to overwhelm her, a sense of hopelessness pulls her away from the one thing she has always longed for: a family.

As Nix watches his wife struggle with something he doesn’t understand, he can’t help but feel disconnected to his woman. The Kadence he once knew has drifted into the darkness. In her place is a shadow of the woman she once was, one who is fearful of the impossible…failing their daughter.

This Valentine’s Day, Nix has one goal — to reclaim the woman who gave him everything.

*Please note this is a novella and features the characters from the previous storyline.
The events of Reclaimed take place after Incandescent and Affliction. Book one and two in the Knights Rebels MC.
To get the full advantage of the story, and character development, I strongly suggest you read in order.

Click Continue Reading to read the reviews for each book!!! END_OF_DOCUMENT_TOKEN_TO_BE_REPLACED 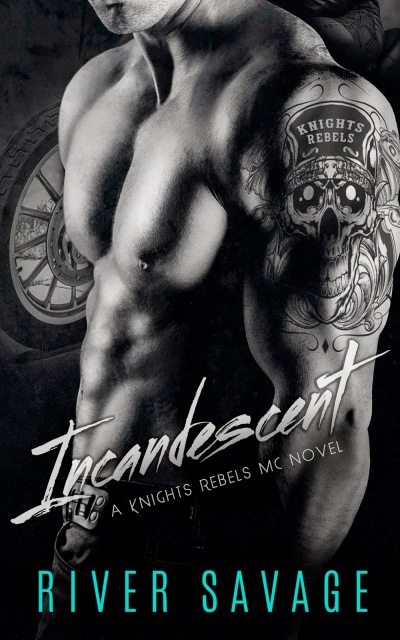 Phoenix ‘Nix’ Knight thought pulling his club out of the illegal shit his Pops got them into was difficult.Until he meets Kadence.

Kadence Turner has no business lusting over a student’s father, especially the president of the Knights Rebels MC. Nix is crass, obnoxious and dangerously sexy and for some reason, Kadence can’t seem to hate him for it. The bossy biker breaks down her defenses, but unlike the old Kadence, the woman she is today won’t give in without a fight.

The tension is undeniable, the attraction fierce. A man that wants what he wants and a woman that will fight him every step of the way.

This is the first book in the Knights Rebel MC Series and I seriously flippin FLOVED this book!!  I love MC novels, but it takes a good one to keep me interested and I seriously read this in one sitting.   One word FANFREAKINGTASTIC!

We first meet Kadence (btw I fell in love with that name).   She has had one whirlwind of a past.   Was previously married to what turned out to be scum of the earth named Zane.  He hurts her, destroys her trust in men and her trust in everything.  But she is a survivor and is so much stronger because of what she went through.  She has her heart under lock and key until these heavy boots, leather cut and all kinds of sexiness strut into her classroom and her walls start to crack, or should I say her “V” starts talking!

Nix Knight, HOLY HOTNESS PHOENIX KNIGHT!  HOT HOT HOT.  I fell in love with this man as soon as he opened his mouth. I need a Nix is my life like pronto.  He is strong, dominant, possessive, one hot helluva Alpha Male and happens to be the president of The Knights Rebel MC.  Brown hair, green eyes to die for and tattoos everywhere, when he walks into a room your gonna know it.  He doesn’t chase after women, like EVER.  However when he stumbles in to his sons classroom and meets his teacher Kadence with her sassy mouth, sexy little hot self, smart remarks and I take no crap attitude has sucked him in.  He wants her, he wants her bad but he is going to have to put in some work to get her!

She Promises him ONE Date..

“What am I saying?  Am I really considering having sex with this man?  This crass, dirty sexy man who pushes my buttons, who irritates me while at the same time manages to turn me on?  Of course I am.  Why else would I get on his bike”

And the rest is sweet history..

I don’t want to spoil this book for you.  SO much happened.   The dual points of view in this book kept you interested, dying to see what happens next.  I laughed a lot, I cried a lot.  My heart felt like it was being gripped and torn every which way.  There are three sides to Nix Knight.   The Biker, The Father and The HOT AS SIN LOVER!!! He is the perfect blend of yumminess.  The love he has for his entire
family” melts my heart.

“As much as you hate your scars, I love them, ‘cause they make you, you.  The person who stood in front of me, and for the time, ever, let me in. Me.  If anyone is unworthy of that, it’s me baby”

The scenarios that unfold in this book, the story that River wrote was seriously beautiful.  You’ve got Kadence, Nix, Little Z, then Zane reappears, Nix ex who is complete Trash makes trouble.  Then you meet the rest of the boys at the club.  There are A LOT of stories to be told here one I am DYING for is Sy’s story.  God that man has a story to tell and Im itchin to get my hands on it.  Like any club, they stick together and when things get hairy they are all there for their Prez and believe me things get bad!

I give this book 5 BLAZIN, Sexy Biker stars.  It takes a lot to keep me interested in MC books considering some Ive read and thought they would never be topped, but River Savage has done it. The writing flowed, the series flowed, and my heart was pumping full speed through this entire book.   This book is utterly amazing and I implore each and every one of you to pick it up!! 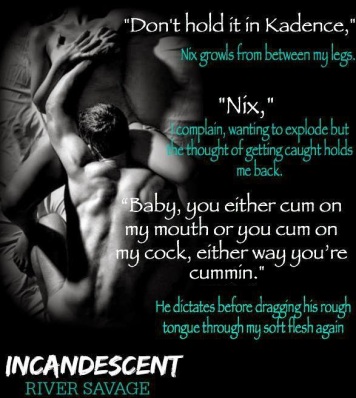 END_OF_DOCUMENT_TOKEN_TO_BE_REPLACED

Phoenix ‘Nix’ Knight thought  pulling his club out of the illegal shit his Pops got them into was difficult.  Until he meets Kadence.  Kadence Turner has no business  lusting over a student’s father, especially the president of the Knights Rebels MC. Nix is crass, obnoxious and dangerously sexy and for some reason, Kadence can’t seem to hate him for it. The bossy biker breaks down her defenses, but unlike the old Kadence, the woman she is today won’t give in without a fight.  The tension is undeniable, the attraction fierce. A man that wants what he wants and a woman that will fight him every step of the way.